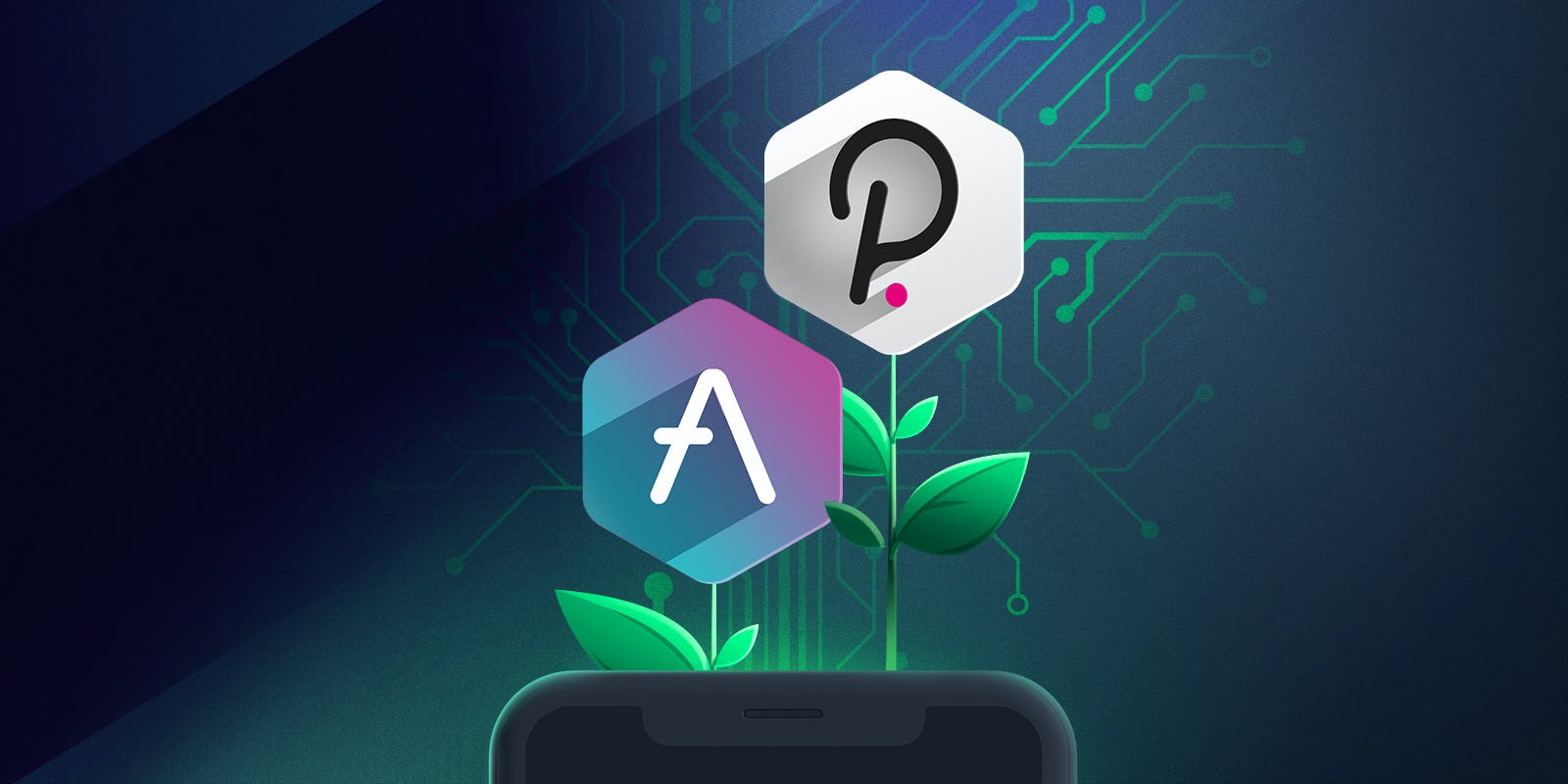 Are DOT and AAVE part of your asset portfolio? If the answer is yes, then it's high time you start getting a passive return on them! Lucky for you, on April 21, 2022, SwissBorg is launching Smart Yield wallets on DOT and AAVE, so you can let these cryptos work for you while you sit back and count the earnings.

When launching a Smart Yield wallet, we do our best to provide you with truly competitive yield rates, and this time around, those rates are 20% p.a. on DOT and 7% p.a. on AAVE.

DOT is the native token of Polkadot - an open-source sharded multichain protocol. As Web3 Foundation's flagship protocol, Polkadot aims to remove many of the limitations of current blockchains, including scalability and security.

Its novel technical features allow communication, regardless of data or asset type, between unrelated blockchains, done in a secure, trustless, and decentralised way. Be it a public chain, a private chain, a permissionless network, an oracle or a future technology, Polkadot can connect to it. This way, the protocol serves as a foundation for creating applications, services, institutions and a decentralised web controlled by users.

There is no doubt that Polkadot will play a major role in a universe with an ever-increasing number of independent blockchains.

Polkadot can also update its own codebase autonomously and forklessly according to the wishes of token holders.

Its DOT token is used for governance and chain validation by staking.

AAVE, just like DOT, is a native token, but in this case, of the Aave decentralised finance protocol.

Originally named ETHLend, the protocol was launched in 2017 with the purpose of allowing people to lend, borrow and earn interest on crypto while excluding any middlemen. Even though it started as just a peer-to-peer lending platform, it eventually evolved into a global pooled money market.

Stani Kulechov, frustrated with the lack of Ethereum-based lending applications, is the man that founded Aave.

What was the idea behind it? Having a system of smart contracts which allows a distributed network of computers running Aave software to manage assets. A system like this removes the need for including any institution or person in the process - one of the main goals of DeFi.

How does it work? Aave's software creates lending pools through which users can lend or borrow around 20 different cryptocurrencies. The lenders earn interest by depositing digital assets, and the borrowers use this liquidity to take out loans while putting their crypto as collateral.

Although competition is strong, Aave still manages to have several unique selling points, such as a greater amount of choice, flash loans, and the possibility to alternate between fixed and variable interest rates, among other things. Some even say that Aave is a key DeFi brick in building DeFi financial strategies (leverage, short, market-neutral).

To make all of this possible, Aave issues aTokens and AAVE.

The AAVE token enables its holders to avoid fees when taking out loans denominated in the token. Borrowers who use AAVE as collateral get discounted fees and can borrow more.

Staked AAVE is used as a reserve and a mitigation tool in case of a shortfall event. For that reason, the protocol rewards those deciding to stake their tokens.

Having AAVE also means that you can look at loans before they are released publicly and have a say in the development of the protocol.

If you like waking up every morning and seeing your cryptos bringing in earnings, then activating a Smart Yield wallet on DOT and/or AAVE should be your next step.

Don't worry; earning a daily yield with SwissBorg is not complicated. Instead, it takes just a few taps to get the best out of yield farming!

Knowing the risks and hassles associated with traditional yield farming, we put a lot of work into perfecting the Smart Yield program. That is why today, we are able to proudly present all of its benefits.

By allocating assets to blue-chip platforms only, Smart Yield lowers risk, and its strategy optimiser leaves no investment opportunity unmonitored.

Only the best investment opportunities are used, and the yield that you earn is compounded daily, giving you a higher yield over time.

To start enjoying these benefits with no minimum investment period, all you need to do is make a deposit of just $10.

What's more, those of you who have a Premium user account also get a yield boost of 1.5X, 1.75X or even 2X, depending on which Premium account option you went for.

More information on the yield boost and other things that come with having an account type that is not Standard can be found on the SwissBorg Premium account options page.

Since we know our users love simplicity, activating Smart Yield does not take much time or effort. Instead, we only ask the user to complete the following short steps:

Note that while there is no minimum investment period, redemptions are actioned every 24 hours. Once you ask to redeem funds, they will be transferred to your active account at 8 AM CET the following day.

Invest in AAVE and DOT today with the SwissBorg app

SwissBorg registered as a ‘PSAN’ with France’s AMF