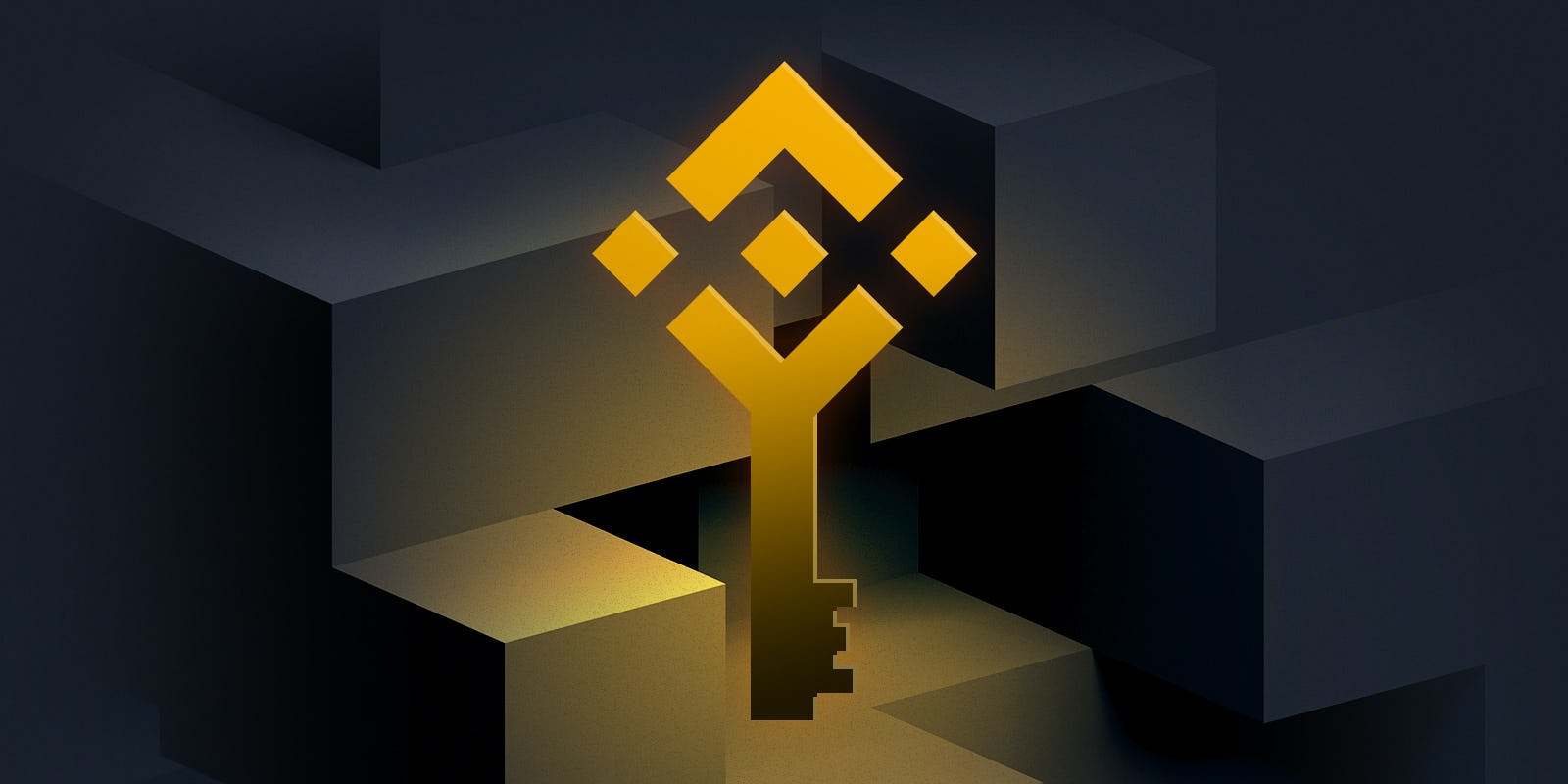 What is the Binance Smart Chain?

Scalability is one of the most challenging issues for Ethereum and high fees. Network congestion has resulted in regular complaints from users and developers. Launched on 01 September 2020, Binance Smart Chain (BSC) attempts to be a solution to those problems. BSC forms a side-chain structure alongside the existing Binance Chain, which is a high-performance, low-latency blockchain but as a design choice to enhance speed, it was not able to handle smart contracts. Thus, BSC, which can handle smart contracts and be used to build dApps (decentralized applications), is connected with the high throughput Binance Chain, so that it can enjoy really fast speeds and low transaction fees while being programmable.

The Binance Smart Chain (BSC) is fully compatible with the Ethereum Virtual Machine and can support all tools built in Ethereum including Metamask wallet, which is a popular browser extension that enables users to run dApps and interact with smart contracts. By building interoperability with Ethereum, the BSC is able not only to provide a faster and cheaper blockchain than Ethereum, but also allow developers to port their code and protocols into the BSC with minimal effort. Ethereum tokens can be converted free of charge into wrapped or pegged tokens to be used on BSC via the Binance Bridge Project, which further increases its interoperability.

Additionally, BSC integrates oracles such as ChainLink and Band Protocol so that developers can connect to real-world data directly without having to build the infrastructure themselves.

Finally, BSC uses a staking-based consensus algorithm where participants stake BNB to become validators and fees are paid in Binance Token (BNB). Staking, providing liquidity or lending BNB and obtaining a yield for it results in increased value and utility for the BNB, further enhancing its perceived value and bringing the largest centralised crypto exchange into DeFi.

If you want to read more about the different ways to earn a yield and how SwissBorg combines the best of all worlds (CeFi and DeFi), check this article.

Data obtained from: 1. Binance, 2. DeFi Pulse 3. Defistation, 4. State of the dapps, 5. Math dapp, 6. Etherscan, 7.BSCScan, 8. Own calculations based on Etherscan and BSCScan data

As can be seen from the above table, Ethereum has been around for much longer than the BSC, which explains the far larger number of dApps compared to those present in the BSC, as well as the greater value locked in the ecosystem. However, when looking at the total number of transactions during the week of 17-23 November, we can see that BSC has already achieved 11% of the volume of the Ethereum network in less than three months of existence. Not only this, but when we compare the average fees paid for each transaction during week 47 of 2020, we can observe that the fees on the Ethereum network were 32 times higher than in BSC! Put another way, the fees on BSC are 97% cheaper than in Ethereum. In addition, average block time is faster in BSC. For dApps where transaction costs and speed are an important variable, BSC boasts a substantial advantage to Ethereum 1.0.

Ethereum uses various stablecoins, which the USD Coin (USDC) and DAI are two of the largest stablecoins and which are supported in the Wealth App. USDC is fully backed by US dollars whereas DAI which was released in late 2017 and is backed by crypto collateral assets and is pegged to the US dollar has maintained its soft peg despite the strong sell-off in the crypto markets in 2018 and 2019. For the native stablecoins of BSC, BUSD is also fully backed by US dollars, audited monthly and US-regulated whereas VAI is a decentralised stablecoin backed by a basket of crypto assets, with a design similar to that of DAI. However, VAI has just been launched and thus lacks the robust track record of DAI of keeping its peg to the US dollar.

Another interesting feature of the BSC is that its native token, BNB, is non-inflationary, so that, keeping all else equal, it would not lose value over time. On the other hand, Ethereum is an inflationary token with a current inflation rate of about 4-5% per annum. The supply growth rate is expected to decrease by half or more once Ethereum 2.0 arrives. 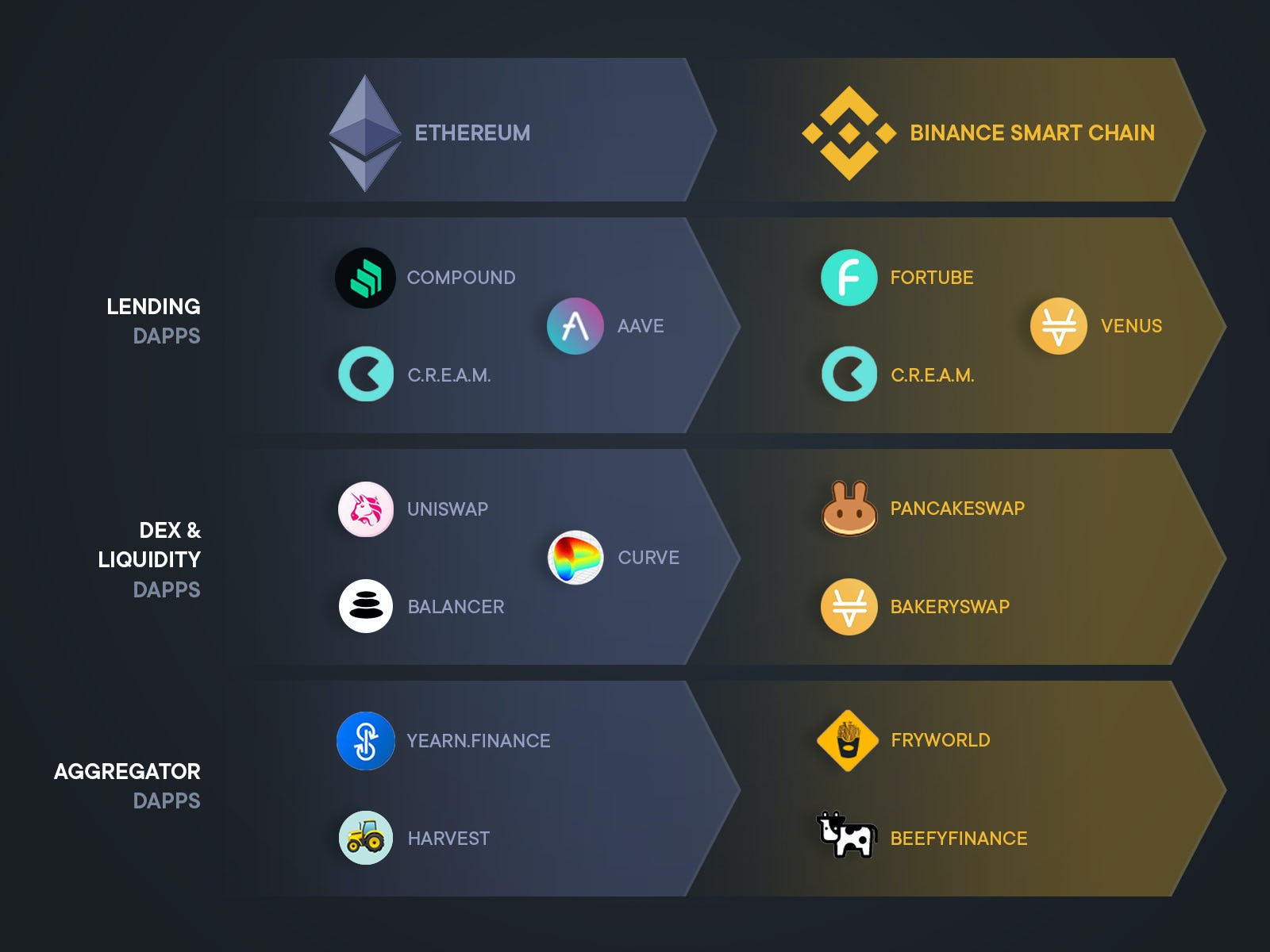 Despite the recency of BSC, there are a number of protocols that have sprung up which are similar to already established DeFi yield farming protocols on the Ethereum Blockchain:

Despite the presence of similar dApps in BSC, it should be acknowledged that their liquidity is still much lower than those dApps in Ethereum, such that there are fewer available pairs to trade and in case of a market decline, there is a lower possibility to withdraw the funds. In addition, the Ethereum dApps mentioned above have been around for longer, which means that their economic logic and technology has been tested for a longer period of time, something which is key in such a high-risk environment as the one of DeFi.

Congestions in the Ethereum network have led to the creation of competing blockchains (BSC, Polkadot, and Tron, among others) which offer superior speeds and lower costs in order to establish themselves as the pre-eminent blockchain that will power the DeFi revolution. It is a healthy sign for the blockchain ecosystem that new chains are being developed, as this brings increased innovation and challenges for the incumbent to overcome.

Binance Smart Chain will also offer new staking capabilities that allow BNB token holder to earn a yield on Binance coin, resulting in increased utility for the token (which is available through the SwissBorg Wealth App!).

Given BSC’s much lower fees and faster speed, its intelligent design, the pull factor from the large existing user base of Binance and the sheer determination and productivity of the developers in the Binance ecosystem, BSC can become a true challenger to Ethereum and is likely to continue growing fast in the coming months.

The arrival of Ethereum 2.0 and its expected enhanced technical capabilities might lead to these competing blockchains to become less popular, if Ethereum 2.0 indeed succeeds in its improvement goals. If it doesn’t, BSC might become only more popular in the months and years to come, which would be very bullish for the BNB token.