What is inflation, and how does it apply to crypto? 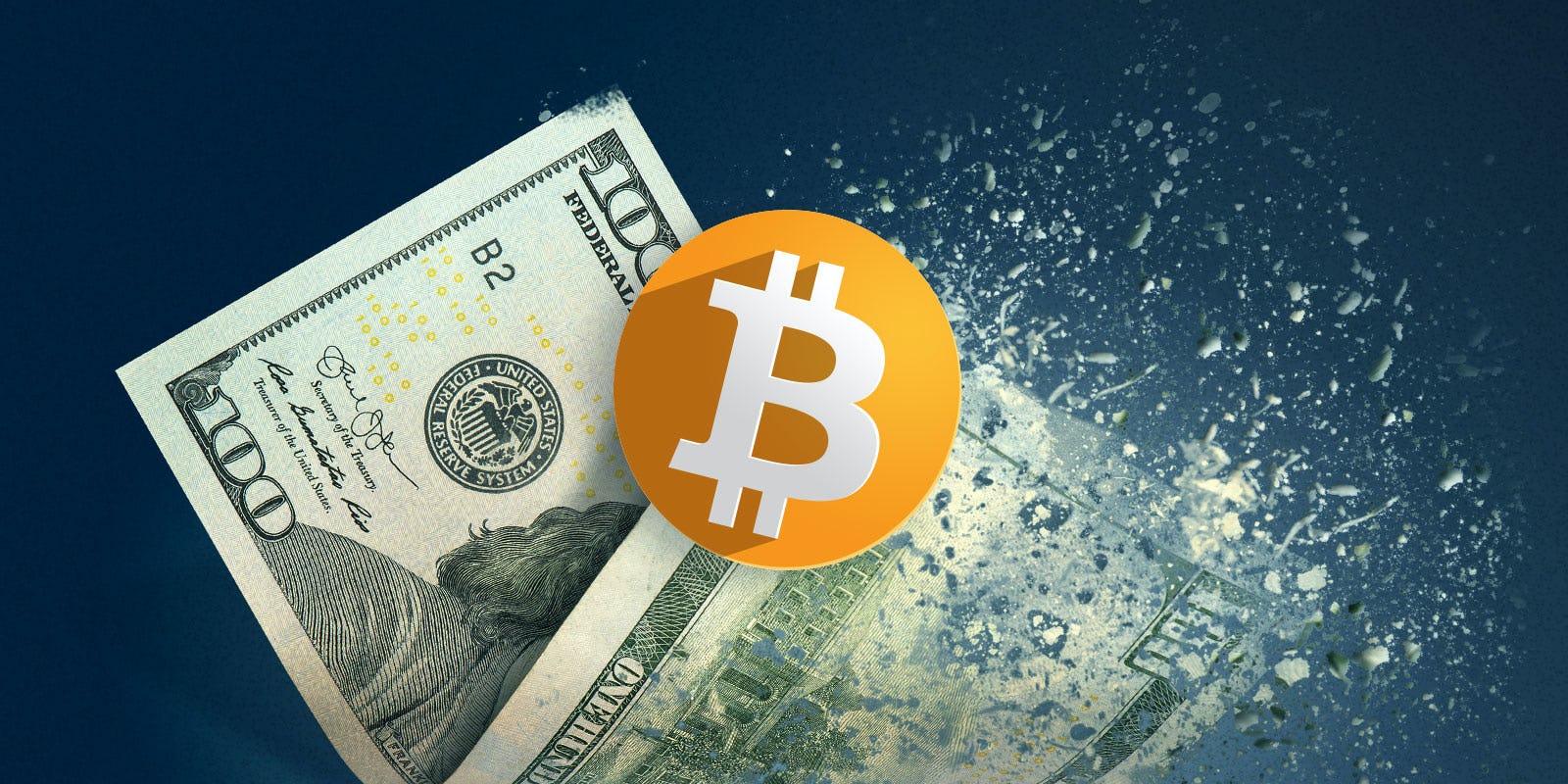 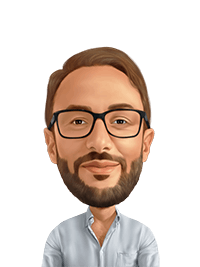 One of the biggest buzzwords in financial media at the moment is inflation, with Google Trends telling us that searches for the term are the highest they’ve been in five years.

But what does inflation mean for the average consumer or investor? And what can you do about it?

This is the first article in a series of pieces that will cover how investors can use crypto to tackle inflation, with Part 2 covering specific cryptos that can counter high inflation rates.

Inflation measures how much more expensive a set of goods and services has become over a certain period, usually a year. For example, if a loaf of bread cost EUR2 one year ago, but now costs EUR2.50, the price increase (or rate of inflation) is 25%.

If a currency is subject to inflation, it means that its purchasing power will fall over time. In other words, you would be able to buy less goods and services with the same amount of money.

Inflation is calculated by taking a basket that represents all goods and services (clothes, food, insurance, housing, etc.) consumed during a certain period of time, and then compares it to the cost in the previous period to calculate the rate of increase or decrease.

Inflation is caused by supply and demand. If the demand for goods or services increases but the supply remains the same or goes down this will most likely pull the price up. For example, the price of wheat can go up for many reasons such as bad weather, distribution issues, war, and more. This will make the price of the bread more expensive. Every single element of the basket is affected by supply and demand.

Central banks monetary policies also affect inflation, either directly or indirectly. A common example is the use of interest rates, which are lowered to encourage investments and consumer spending and borrowing, or increased to discourage those activities.

Is inflation a problem?

The perfect scenario would be to have a bit of everything but not too much of a single thing: a good employment rate is nice, but full employment is bad because it can generate inflation (the same goes for wages). At the same time, high inflation is very bad, but some inflation (the FED’s current mandate is 2%) is good because it makes the economy healthy.

Simply, too much of a good thing is not healthy.

Let’s say you are earning EUR100,000 in a country where the rate of inflation is 10%. At the end of one year, your EUR100,000 salary would have 10% less purchasing power than it did a year before. Therefore, in order to maintain the same standard of living, you would also need a 10% salary increase.

This might not sound like such a bad thing after one year, but if the rate of inflation increases, or if this trend continues for multiple years, it means your salary has a lower and lower value over time in real terms. This then means that the poverty line for your country will increase every year with the rate of inflation, to the point where what was once a healthy salary might not be enough to keep you afloat.

Simply, inflation can hurt if you aren’t receiving a proportionately larger salary or if you don’t possess enough capital to pursue profitable investments, and volatile inflation makes it difficult to budget effectively.

How does inflation apply to cryptocurrencies?

How does this work in practice? In order to better understand inflation, we will perform a comparative analysis of how the traditional financial system and crypto are built, and how equipped they are to fight against inflation.

Our investigation will thus focus on describing the cardinal processes that govern any monetary system: from emission to monetary policies and maximum supply.

Specifically we will focus on Bitcoin versus the US Dollar.

Traditionally, fiat currencies are managed by central banks. Those centralised institutions affect the quantity of money in circulation by buying or selling government securities. When a central bank is looking to increase the quantity of money in circulation, it purchases government securities from commercial banks and institutions. This frees up bank assets: They now have more cash to loan. Central banks do this sort of spending as part of an expansionary or easing monetary policy, which brings down the interest rate in the economy.

Generally speaking, cryptocurrencies don't have a central issuing or regulating authority, depending instead on a decentralised system to record transactions and produce new units.

In the case of Bitcoin, new BTC are generated by a competitive and decentralised process called "mining": Bitcoin miners are processing transactions and securing the network using specialised hardware and are collecting new bitcoins in exchange.

The protocol in itself is designed in such a way that new bitcoins are created at a decreasing and predictable fixed rate. The number of new bitcoins created each year is automatically halved over time until bitcoin issuance halts completely with a total of 21 million bitcoins in existence.

When more miners join the network, it becomes increasingly difficult to make a profit and miners must seek efficiency to cut their operating costs. No central authority or developer has any power to control or manipulate the system to increase their profits. 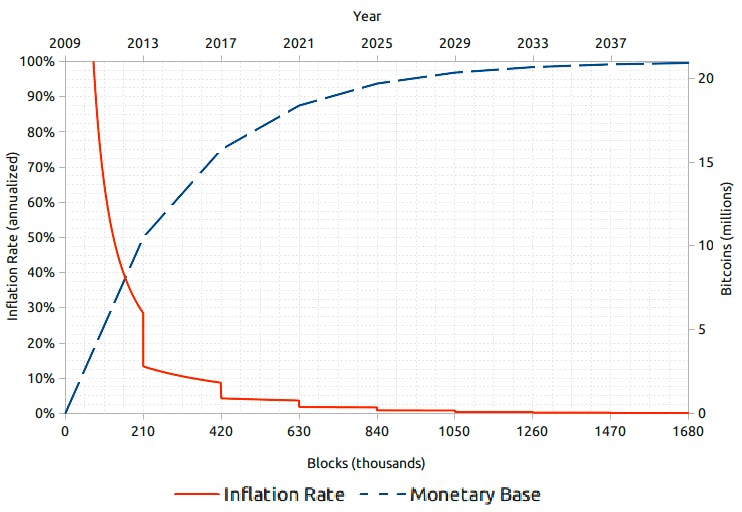 This monetary policy is preprogrammed, meaning it is predictable by design!

In the case of the US dollar’s monetary policy, the FED council has discretionary decisional power over interest rates and money-printing policies.

Interest rates have been modified very often in the last 60 years in order to face rising economic or financial challenges. As shown in the chart below, monetary policy stability is not a strong FED mandate. 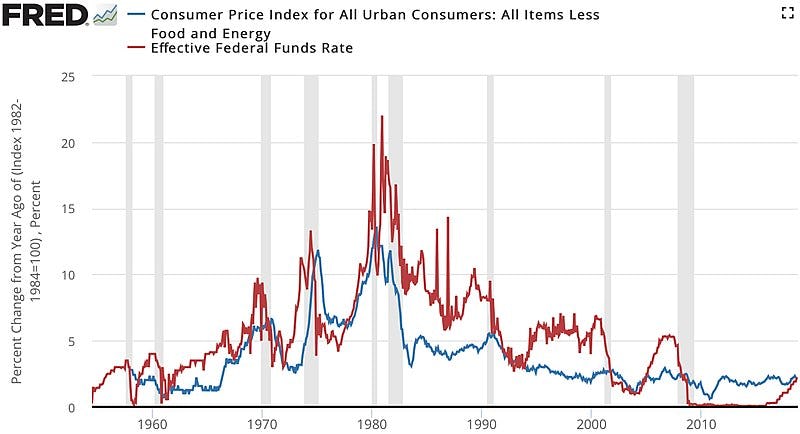 CPI and FED rates since the ‘50s

In fact, in order to keep inflation at bay, at times the FED had to increase rates pretty drastically while other times, they had to reduce it and even rely on quantitative easing policies to boost a depressed economy affected by financial shortages and lack of investments.

As mentioned earlier, high inflation is very bad, but some inflation is good because it makes the economy healthy.

Feels like an algorithm of sorts, right? Preset data, predictable fast response to any change in the system and most of all, a global, overarching and independent controlling system.

There are already many in the current financial world that call for the FED to be more data-driven in order to react faster to market landscape changes.

The problem is that no central bank can control all the variables: the world is interconnected and interdependent, as we are painfully aware now with the Ukrainian war's impact on prime material and supply chain disruptions.

In a world that is inevitably becoming more globalised every day, the power to influence markets - market credibility - of a single country or institution is decreasing over time (global issues vs local answers).

So we can conclude that predictability of fiat monetary policies is not a feature that we should expect to achieve.

As stated before, we know that bitcoin, for example, is limited to 21 million bitcoin; but how about the US dollar?

Well, here things get interesting: look at the next chart where we show how much USD has been globally circulated since 1970, compared to S&P500 value. 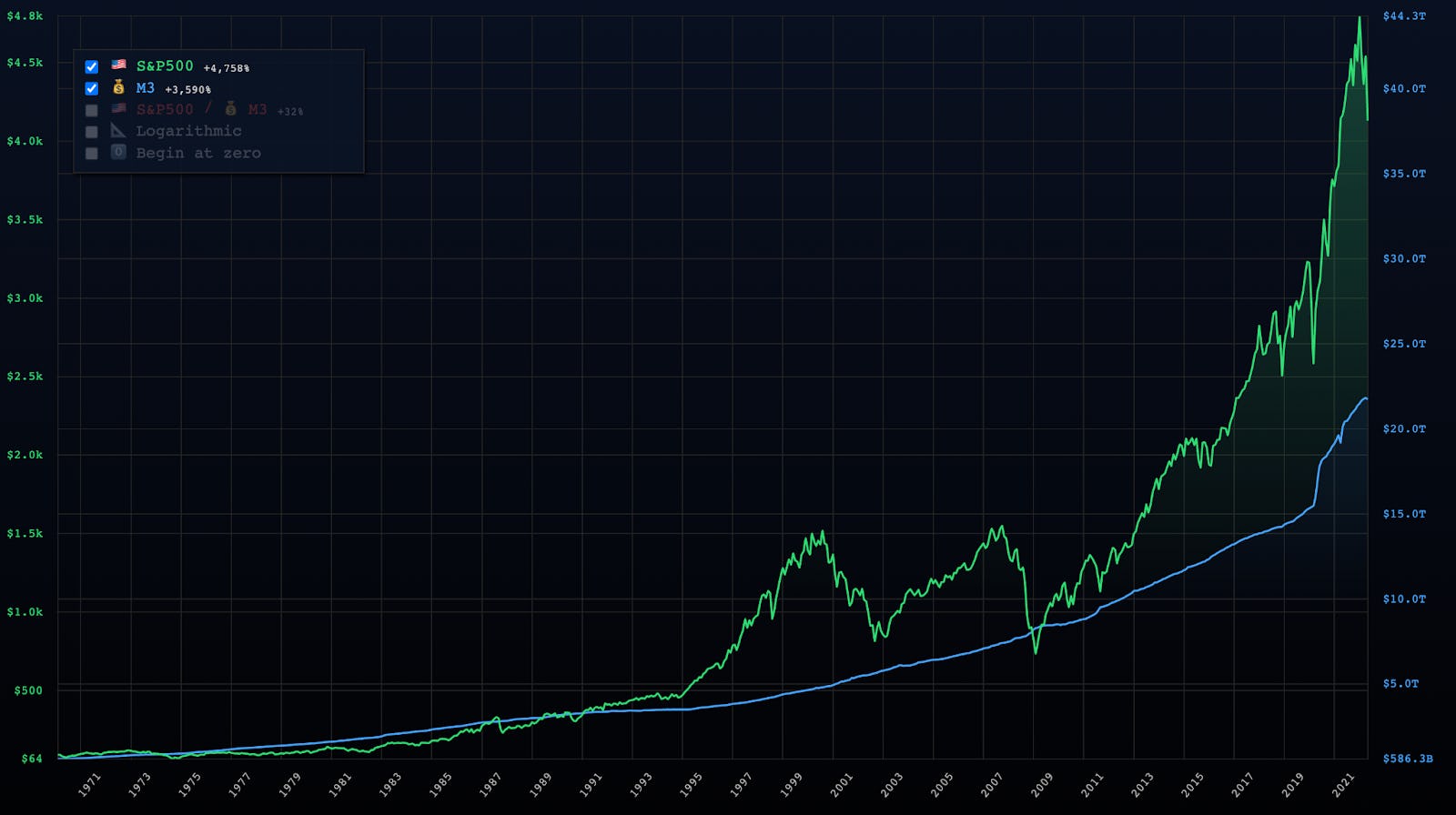 The amount of USD in circulation is increasing over time and it has accelerated quite a lot in recent years: the quantitative easing era gave birth to the current hyper-inflation scenario; but what is also notable is that the M3 curve (total USD in circulation) is a rising pattern by design.

That is in fact a law of the current economic system: money is debt and when it is overprinted to boost the economy without an increase in productivity, it actually devalues it, triggering the need for more money to be printed in order to keep paying the premiums of the original debt, sending us back to square 1.

Ray Dalio, Principles for Dealing with the Changing World Order: the over-printing process

As long as investors are ok with the premium they are getting for lending their cash (the interest they earn) and governments are able to repay their debt, the wheel keeps turning.

Then what is the issue? And why does Bitcoin claim to be different?

Here’s how it works: given that over time the amount of money in circulation is always increasing, and that money printing policies applied during recessions are the causes for future rise in inflation, a cumulative capital erosion effect is produced. In other words, while you have more money, that money value is lower as its purchasing power decreases.

The problem is that since the ‘80s, this effect is accelerating. 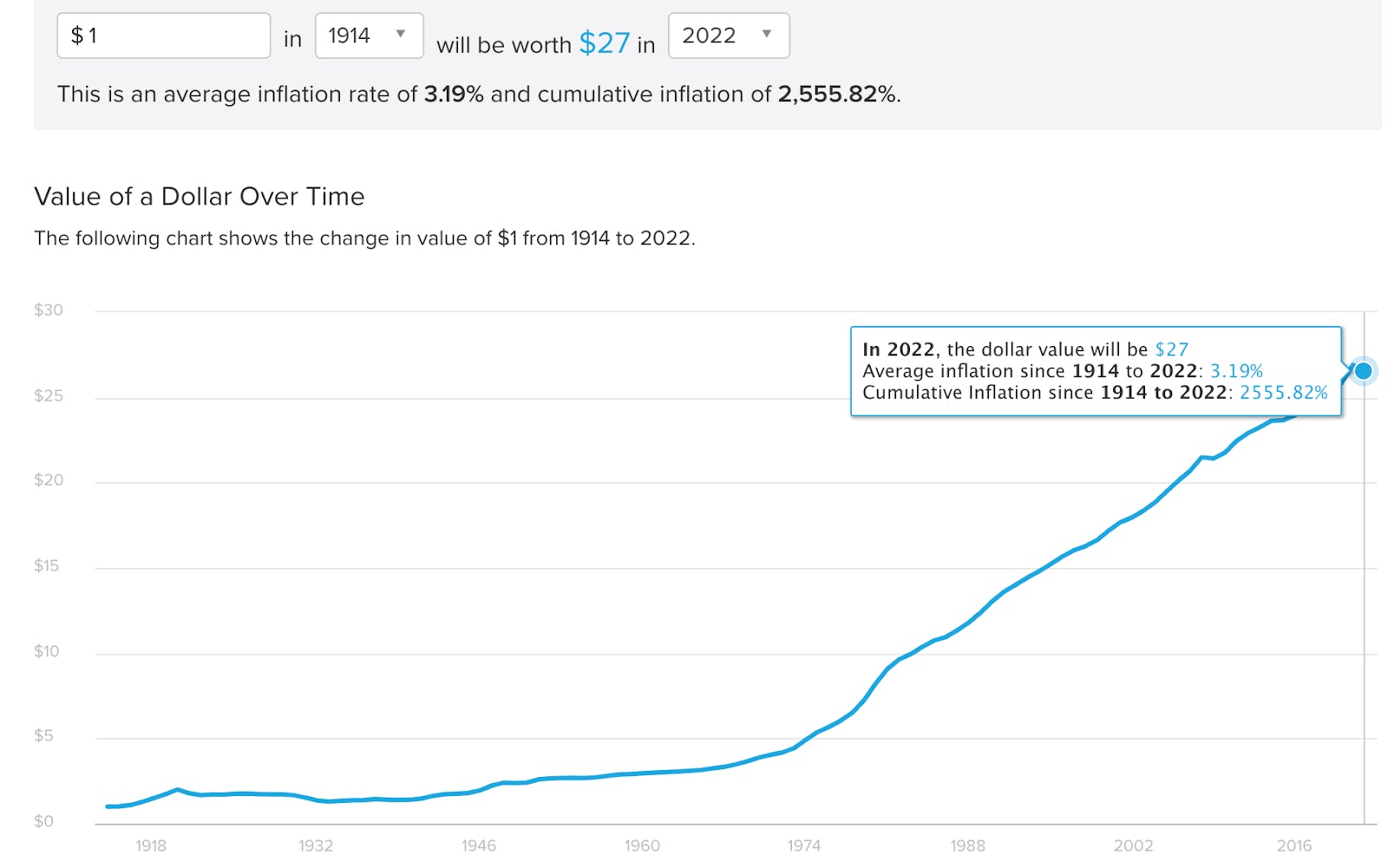 Capital erosion effect is the biggest challenge people are facing: if you don’t have capital to invest to successfully produce stable returns and all your income is primarily generated by your salary, then you need to have a job that can either always guarantee income above the poverty level or at least a contract that increase your wage to minimum 3.19% every year.

Think about sea levels, inflation is similar to global warming: every year sea level rises and you need to be able to move higher above the coast if you don’t want to live underwater.

The problem is that once you go under, it is extremely difficult (if not impossible) to get out. This is why the rich get richer and poor get poorer: the game itself is insanely more difficult if you don’t have enough resources from the start.

Final thoughts on inflation and crypto

Now that we have comparatively analysed both systems, a question arises: when will this stop being sustainable? When will the rising cost of living and global competitiveness create so much social unrest to potentially threaten our current way of life?

Nobody knows the answer to that.

That is in fact the main reason for the existence of crypto and the necessity for decentralised financial systems. The concept of Bitcoin first came into creation in 2008, as a response to the Great Financial Crisis and the financial world’s reliance on banks as intermediaries of all financial transactions; but since then the whole crypto space has evolved much further.

Lastly, I think we should always remembers what a very smart and wise man taught us about how our society works:

“The world as we have created it is a process of our thinking. It cannot be changed without changing our thinking.”

Learn how you can start earning a yield on your crypto!

Can you earn passive income with crypto?

Investor profiles: Determine what type of investor you are based on your risk tolerance

Yield farming crypto: what is the current landscape of earning on crypto