Proof of Work vs. Proof of Stake 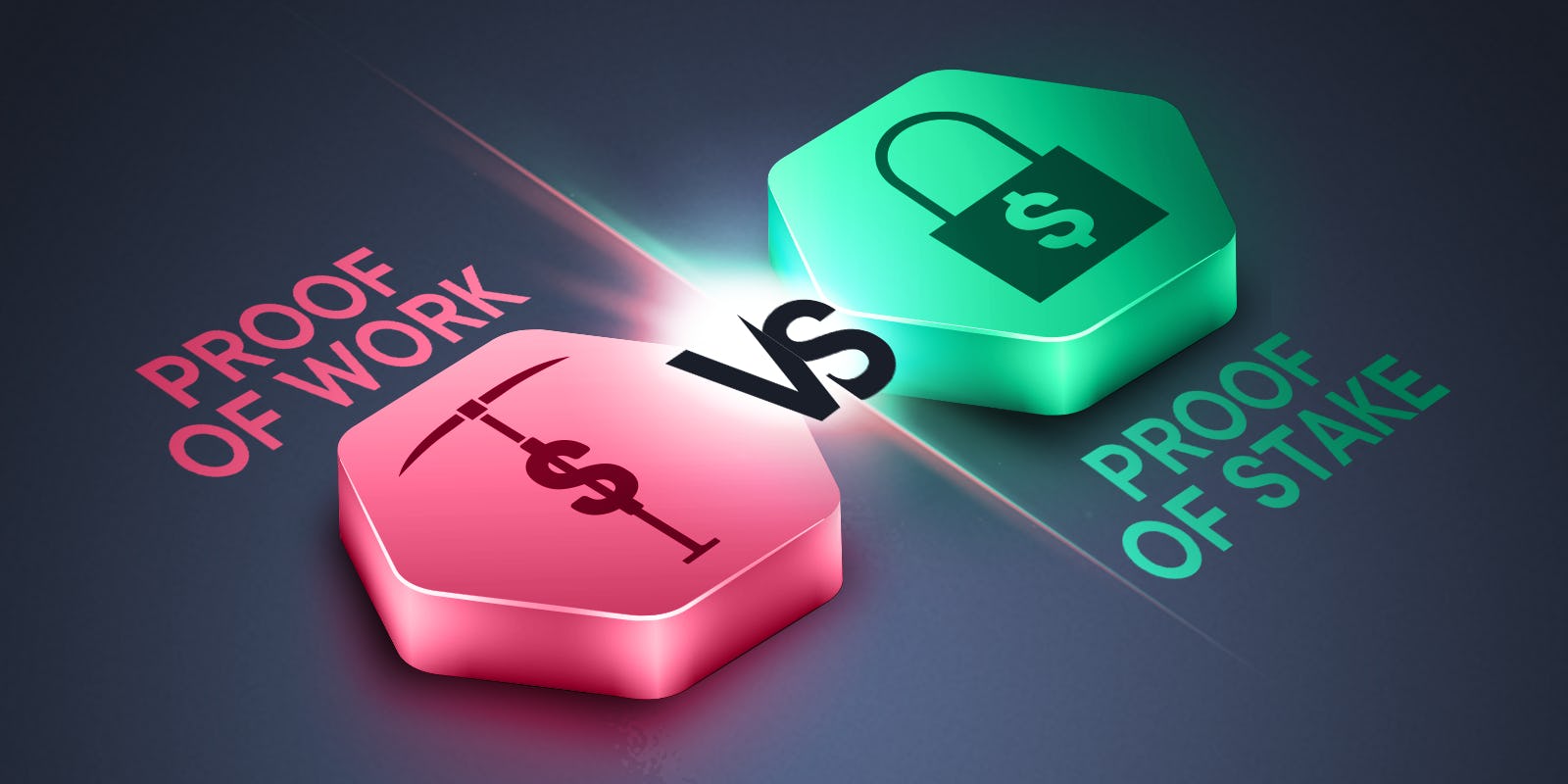 If these words don't mean much to you, then you’re on the right page because today we’ll dive deep into this topic and make things clear for you.

Any centralised system (let’s say some database) has its centre, as the name suggests. In case its data requires an update, it can only be performed by a central authority who remains the sole entity in-charge of maintaining a genuine record.

Blockchain is a decentralised system which obviously means no centre, no authorities. Does it mean that anyone can add, delete or update the data on a blockchain to one’s liking? Of course not. This way anyone could add a desired amount of Bitcoin to their wallet, making the system less trustworthy and reliable, and therefore less valuable. The strong and secure decentralised system must have some way of proving the data. And instead of making a central authority responsible for this, blockchain creates an agreement between all its users. This agreement can be achieved with consensus mechanisms.

Proof of Work and Proof of Stake are the examples of consensus mechanisms that operate on different principles.

Introducing Proof of Work and Proof of Stake

Proof of Work is a common consensus algorithm used by the most popular cryptocurrency networks like Bitcoin and Litecoin. Basically, Proof of Work requires you to install a copy of the entire blockchain to a local machine. With every new transaction, the blockchain compares the data from every machine and the transaction will be approved if the data matches in 51% of cases. That requires a lot of calculations, computing power and electricity (in other words, it requires a lot of work) which is why it’s called Proof of Work.

Proof of Stake is another common consensus algorithm, but instead of using the power from mining machines, it uses users’ coins staked in frozen wallets to verify transactions. In Proof of Work, the more computing power you own, the more advantage in mining you have, whereas in Proof of Stake, the probability of mining a crypto asset depends on the share of coins (stake) that you have. For example, someone who owns 5% of all coins will create about 5% of new blocks.

Now let’s get more into details and compare the two popular consensus mechanisms.

History of Proof of Work

In the early 90s, IBM Research Department employees Cynthia Dwork and Moni Naor shared the idea of a new anti-spam email algorithm known as Proof of Work. A bit later, in 1997 Adam Beck created a working system based on this idea for his spam-combatting project HashCash. Back then this project used the same cryptography methods that are now used in Blockchain technology, and Satoshi Nakamoto later referred to Beck’s work while working on his own project.

Here’s how it works. Mining is the process of creating new transaction blocks and adding them to the blockchain. The PoW consensus mechanism sets its own set of rules that check that the mining process is correct. A miner’s task is to find a new block for the blockchain, which requires a lot of computing power. The first miner who finds the correct solution receives newly generated coins as a reward. But the complexity of the network always changes and adapts and it requires even more computing power over time. That’s why some miners work together in pools or build large mining farms in order to increase computer capacity. The more computing power you have, the more likely you’ll find the right solution first.

But here’s the downside. With every new computer added to the network, it becomes more complex and requires more calculations. With every new hardware added to boost calculations, the energy consumption grows. The energy costs of mining in the largest blockchains is comparable to  energy consumption of some countries. So there is a constant need to buy new gear and consume more electricity in order to be a successful miner.

Just like Proof of Work, the idea of Proof of Stake has its origins in the 90s. Wei Dai brought the idea of monetary policy to his b-money currency project. Satoshi Nakamoto later used some of Dai’s developments when working on Bitcoin.

In 2011 bitcointalk.org user with the nickname QuantumMechanic published the description of the PoS algorithm. A year later, the Peercoin cryptocurrency network was launched and worked on this algorithm.

The key difference between Proof of Work and Proof of Stake is the principle of creating a new block in the blockchain. In PoW, the successful generation of a new block relies heavily on computing power, while in PoS it depends on the number of coins the user owns. Like it was said earlier, someone who owns 5% of all coins will create about 5% of new blocks. This method of mining crypto assets is called forging or minting.

Over the last few years, staking crypto has become way more popular because it is way easier than buying expensive hardware to solve complex mathematical calculations, as is required in PoW. In 2020 Tezos became the largest staking network according to Staking Rewards.Then Coinbase announced that users can stake their Cosmos (ATOM) Tokens. Even Ethereum, one of the most popular crypto assets, is moving from the Proof of Work to the Proof of Stake in the ETH 2.0 upgrade. Staking is becoming the primary form of passive income.

And that’s a fact. For example, a PoS network doesn’t consume as much energy because it doesn’t require huge computing power. With a PoW algorithm, there is the possibility of a “51% attack”. This means that anyone who owns more than 50% of the network's mining hash rate can interrupt the recording of new blocks by preventing other miners from completing blocks. It is possible in the early stage of existence of any crypto asset with PoW mechanism, but it is not possible with PoS because the attacker has to own more than half of all coins. But even if someone has 51% of all coins, it makes him the largest participant of the network and least interested in the fall of the exchange rate.

Besides, staking is a much easier entry point into the crypto ecosystem for users. Instead of buying tons of expensive hardware and looking for the country with the cheapest electricity price, users can just stake their coins in a dedicated wallet for a certain amount of time.

At SwissBorg, we developed our own tool for wealth management and staking crypto called the SwissBorg app. It is powered by the CHSB multi utility token. The idea of the app is to simplify the processes of exchanging, depositing and staking crypto currencies and make it available to anyone. For example, instead of the complicated process of sending money from your virtual bank account to the exchange with the best price, change it to crypto and send to the wallet that supports that exact asset, you can do it with a few taps within our app.

The same with staking CHSB tokens. By staking CHSB, users will get Premium accounts automatically. That means zero fees on BTC and CHSB transactions.

CHSB staking is divided into two categories: classic PoS and DPoS (Delegated Proof of Stake). Classic PoS works by freezing the stakeholder’s coins for a period to validate transactions done through the network. In case of DPoS, a delegate is elected by stakeholders and assigned to become a validator or a block producer. The different benefits of the two types of staking include:

Together, we have learned that:

Download the SwissBorg app now and try staking crypto by yourself today!