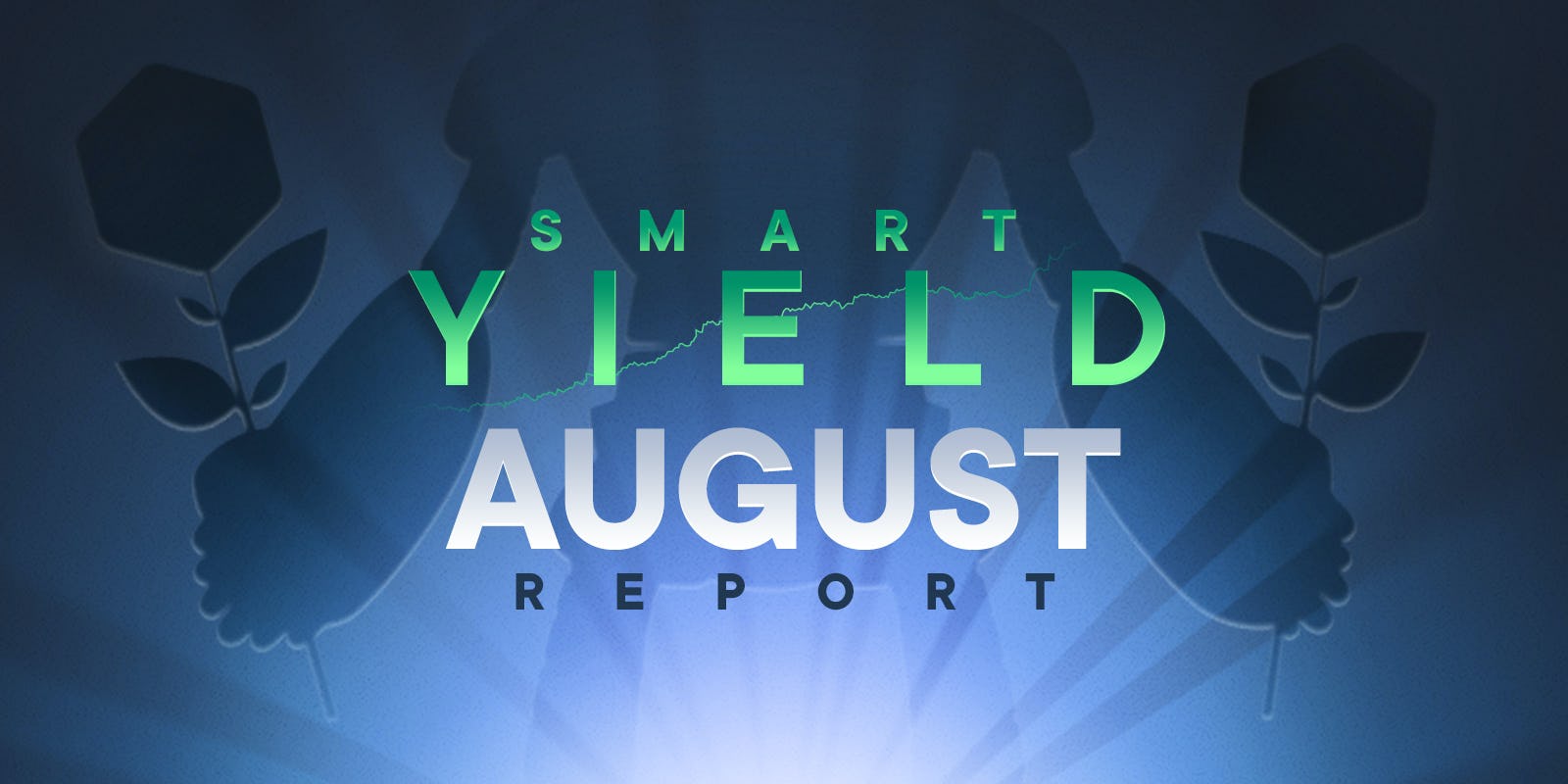 The content of this report will be subject to change based on your feedback and the evolution of the information we receive.

The Smart Yield wallet simplifies and optimises earning a yield on your crypto, every single day. The goal is to find the best return for the lowest risk, as well as offering some of the best yielding conditions available in the market. Learn more about how Smart Yield works.

As has been the trend previously, the total value locked in DeFi platforms closely follows the price trend of the crypto market, with minor deviations from time to time. This means generally constant levels of activity in DeFi. The difference this month has been the emergence of several alternative chains. Some notable new alternative chains to the previous top three (Ethereum, BSC, and Polygon) are Fantom, Avalanche, and Solana.

Fantom has seen a spike in interest mainly due to an attractive incentive program for developers to deploy applications on the chain, where if a certain level of TVL can be maintained over the promotional period, free FTM tokens would be airdropped. This is slightly different to the currently established model of liquidity incentives, where developers are rewarded as opposed to individual DeFi participants. Avalanche also has a similar promotional incentive, where using 2 of DeFi’s household names (Aave and Curve) on Avalanche will result in users being given free AVAX tokens.

Solana has not had any incentive programs, yet has outpaced Avalanche and Fantom in terms of growth. TVL on Solana now stands at $11 billion, which is double that of Polygon and already two thirds of BSC. What’s more remarkable is this is not an EVM-compatible chain, which also means users are forced to use other wallets than MetaMask (the most commonly used browser wallet). This shows that having to switch wallets for non-EVM chains is not a barrier to entry for existing crypto-market participants. Several new projects have deployed on Solana which could explain the recent interest. These include the Mango platform providing attractive yields, and a new gaming project called Star Atlas taking advantage of the recent NFT trend by issuing its own collectibles which resulted in a large influx of new users to Solana.

As with any new technology, safety remains a concern which is often overlooked. This is particularly the case with Solana as it is not an EVM-compatible chain. Some of the knowledge acquired by the crypto community does not transfer over due to the difference in the chain’s architecture, and the use of a different programming language (Rust as opposed to the usual Solidity) also plays a role in making it more difficult to identify security flaws. There have been reports of users losing all tokens in their wallet after giving approvals to malicious websites. This would be noticeable on EVM-compatible chains as each token would require an individual approval transaction.

Safety remains a concern in DeFi, with the largest exploit in DeFi history taking place in August. We had previously identified cross-chain platforms as an emerging trend, and due to the novelty of this type of platform, there is an increased security risk. PolyNetwork is one such cross-chain platform and suffered a loss of $600+ million but was returned by the ‘white-hat’ hacker soon after, though the non-malicious intention of the exploiter was not initially apparent. Several other exploits also took place in August, with two of them netting upwards of $18 million. It is easy to see that the longer a user participates in DeFi platforms outside of the very large household names, the more likely it is they will incur a loss due to exploits.

August continued on a bullish trend, leading ETH and Bitcoin closer to their all-time highs. The overall market dominance of Bitcoin did, however, diminish. This was not reflected in the Smart Yield wallets, as a good portion of the new users are still coming for BTC.

Despite the low rates available due to market conditions, there is a strong interest for the new crypto assets, with the XRP yield wallet continuing to show fast adoption.

The most used yield wallets (USDC, ETH and BTC) have seen their yields decreasing over the last two months. (The yield offered on CHSB, which is not part of the Smart Yield program, has become the most attractive and least volatile of the yield-earning crypto assets available in the SwissBorg app). Despite very similar yields for USDC and USDT, the interest for USDC continues to attract more contributions. 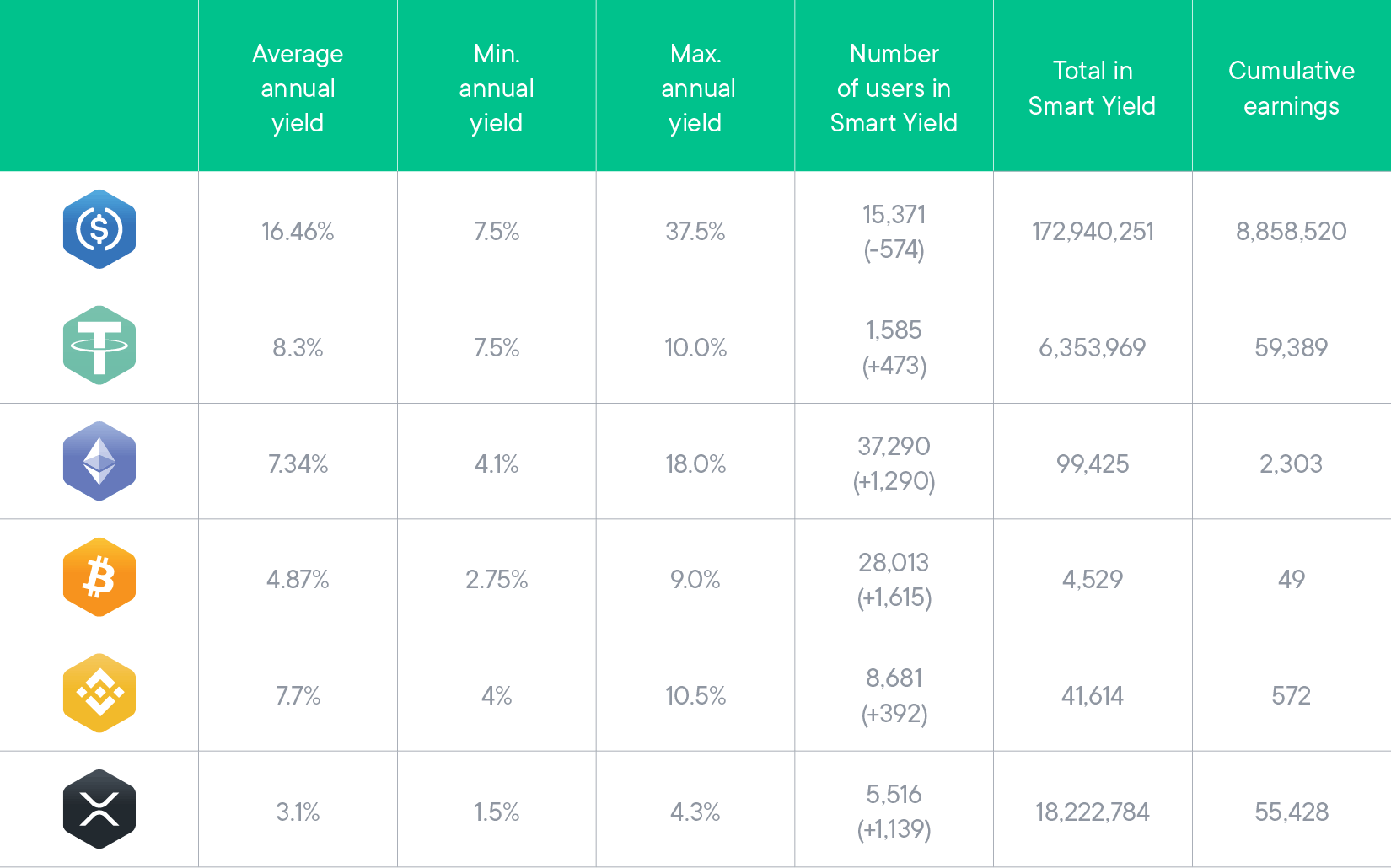 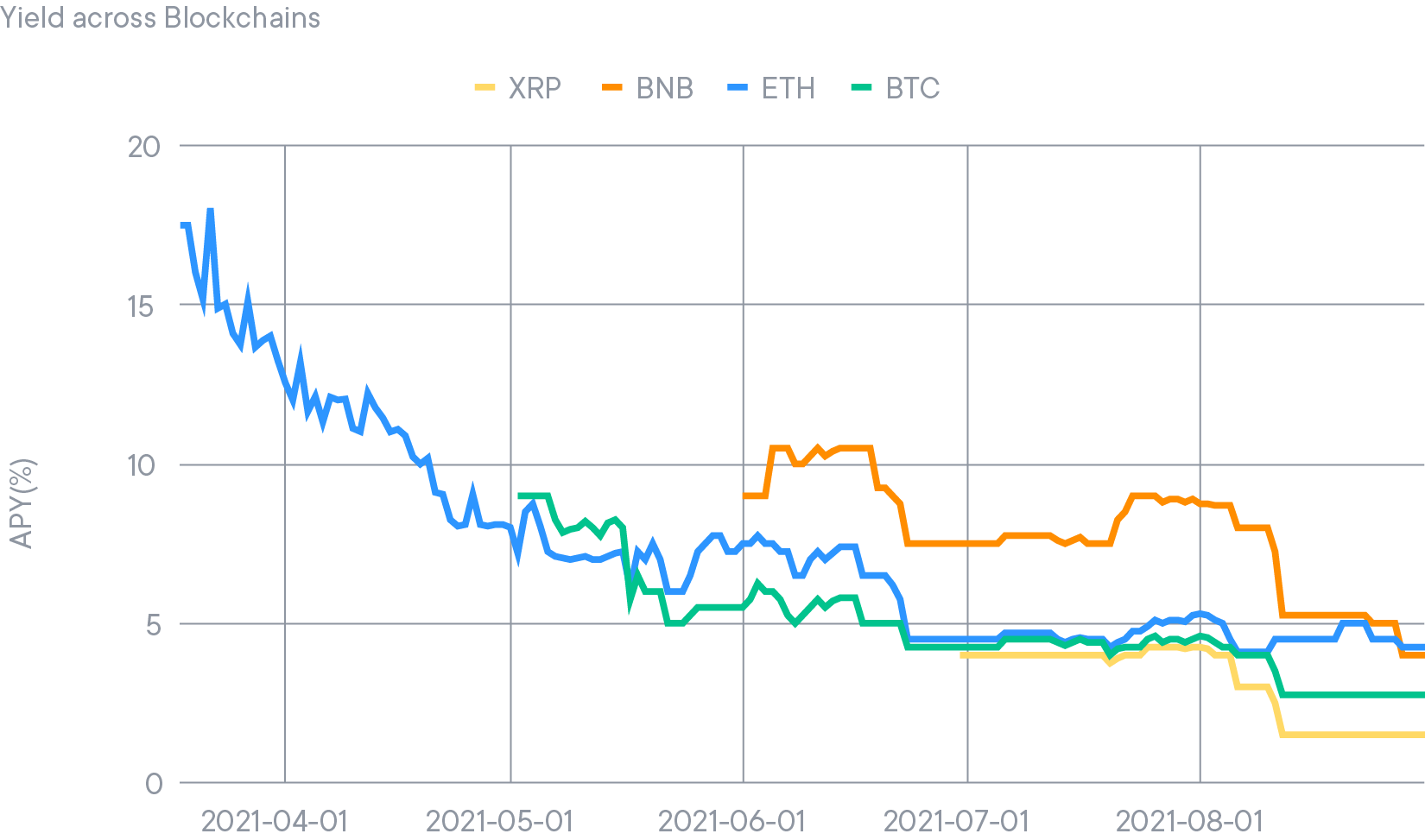 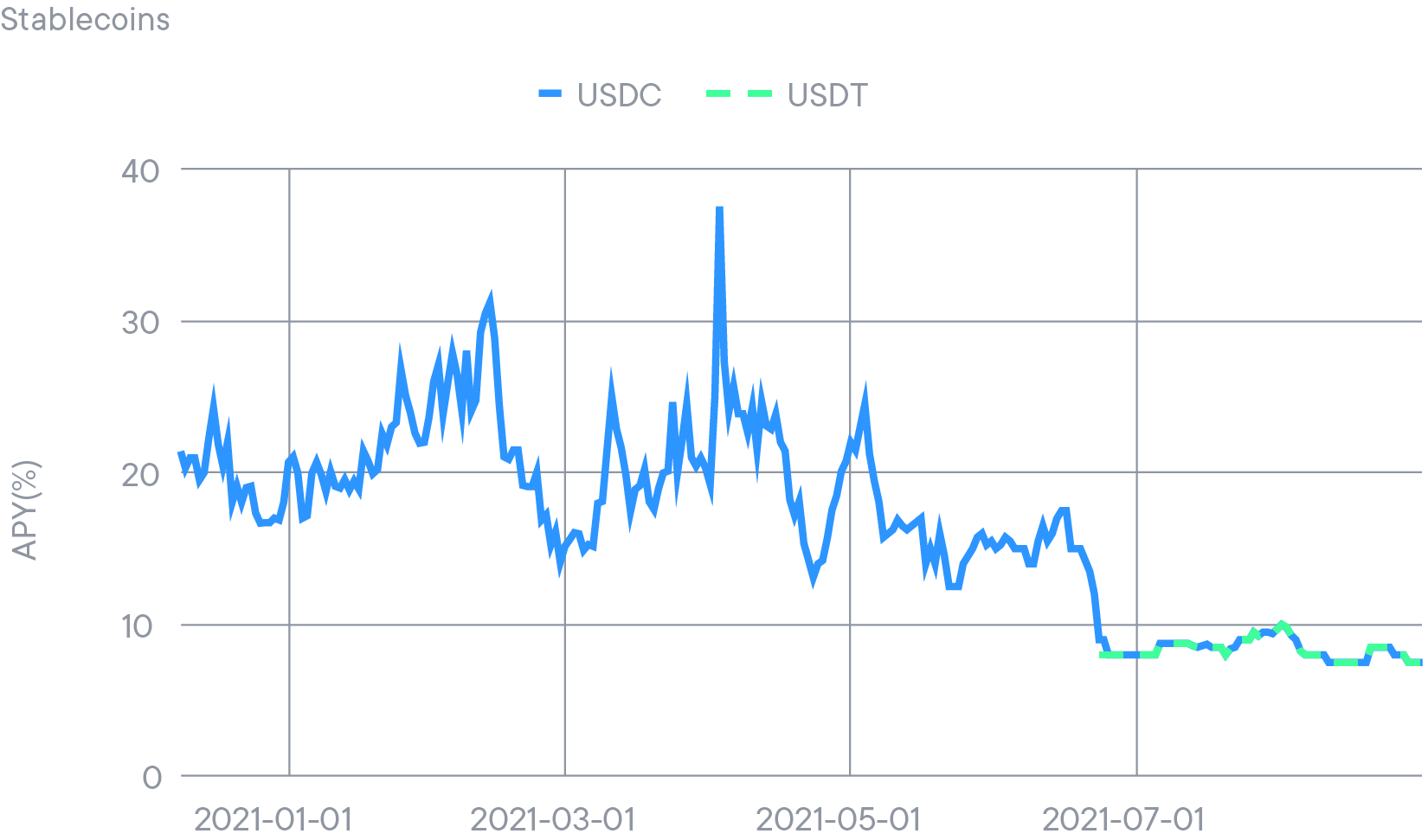 This month, the Smart Yield strategy optimiser reduced the number of programs used to 19. The risk related to many programs increased and the potential diversification was not worth the risk. For the same reason, exposure to the safest program has been greatly increased.

Exposure was restricted to the Matic, ETH and BSC blockchains. 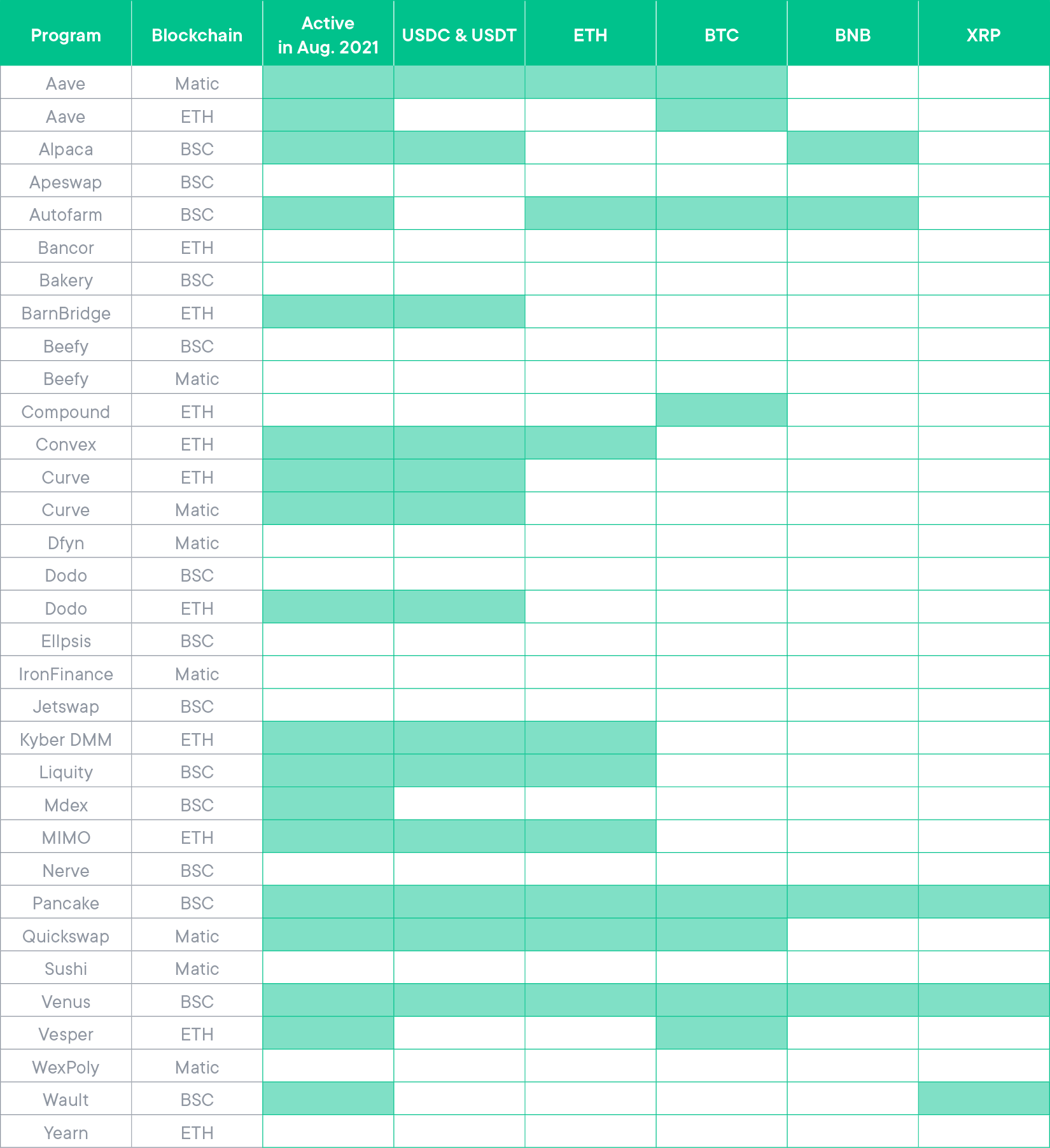 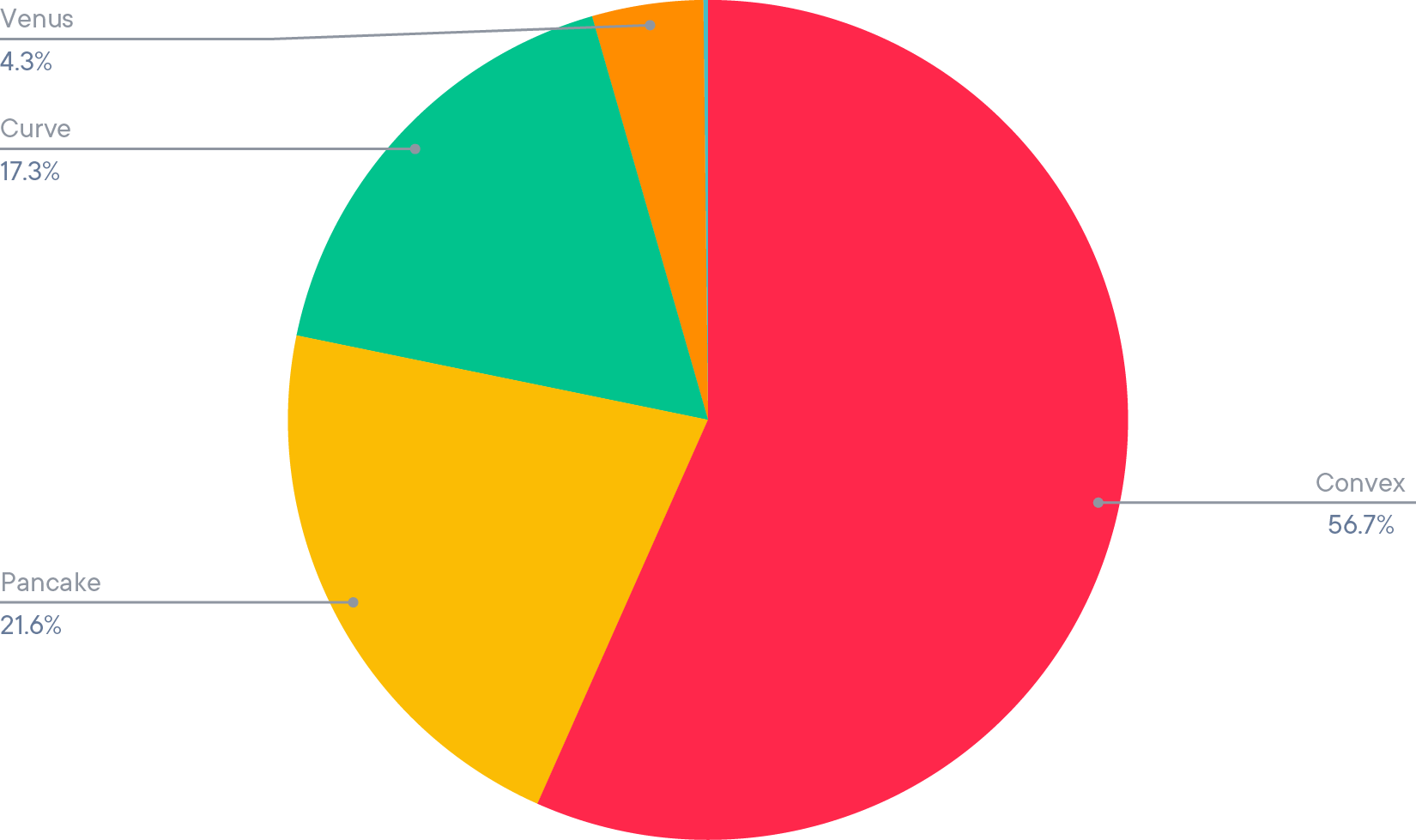 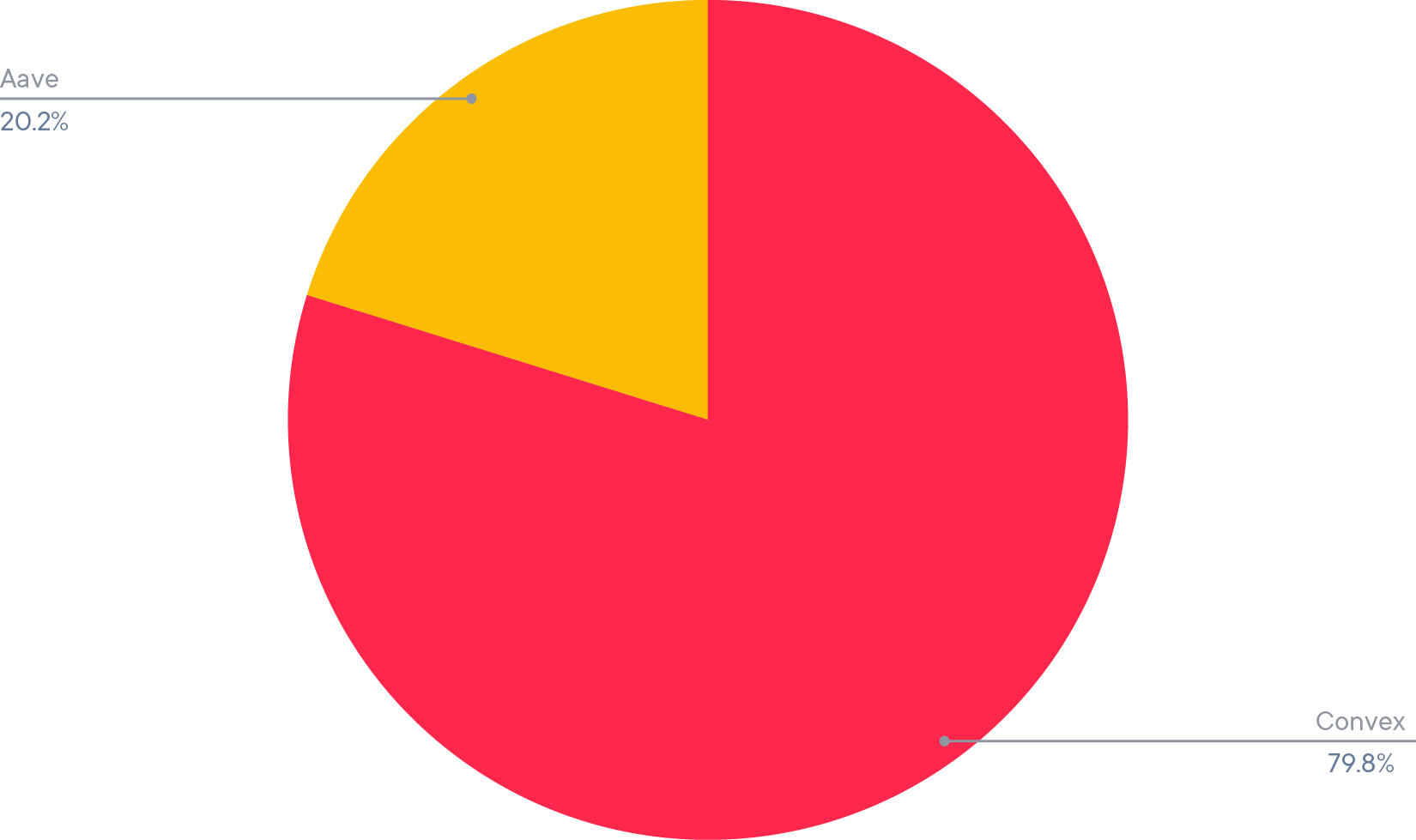 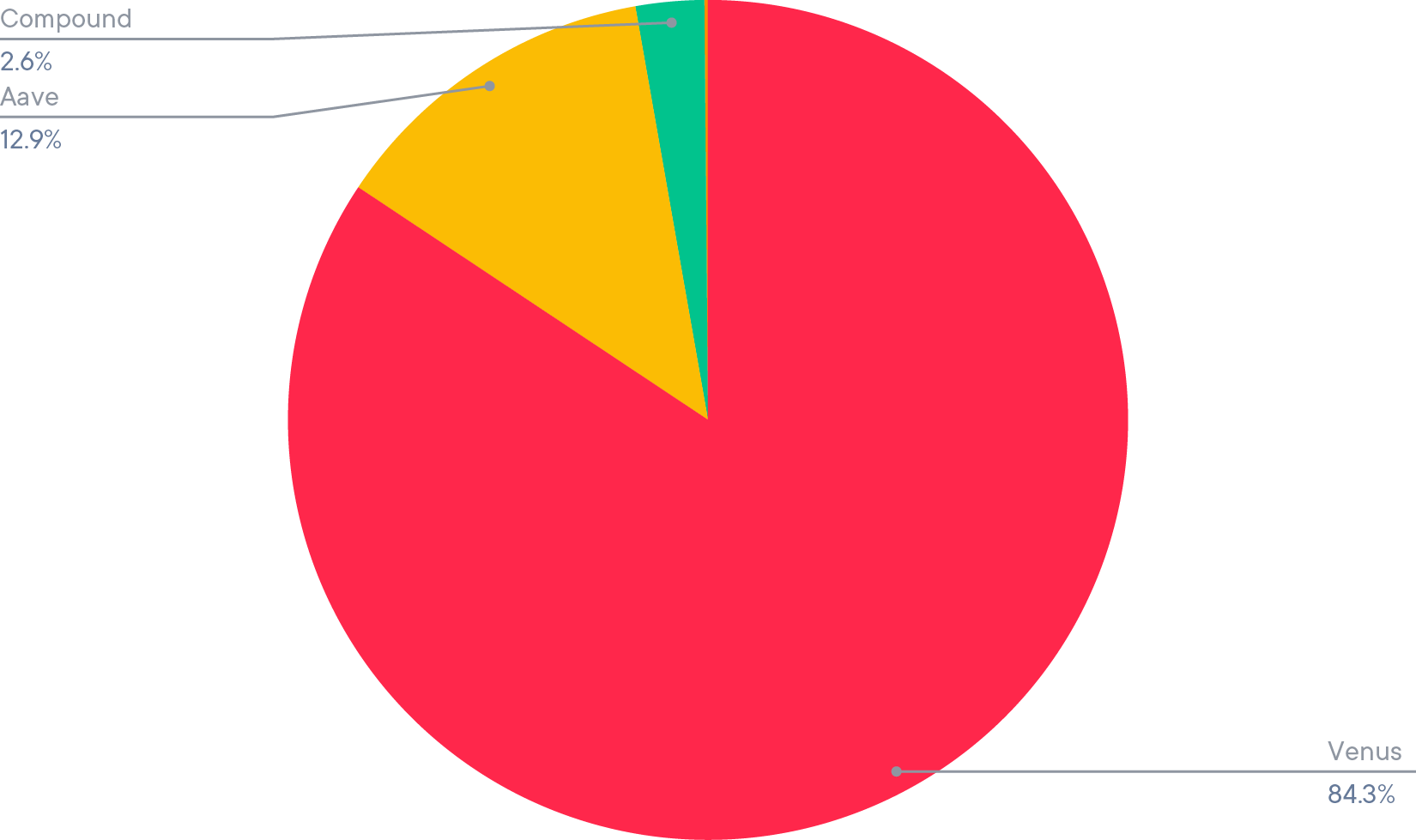 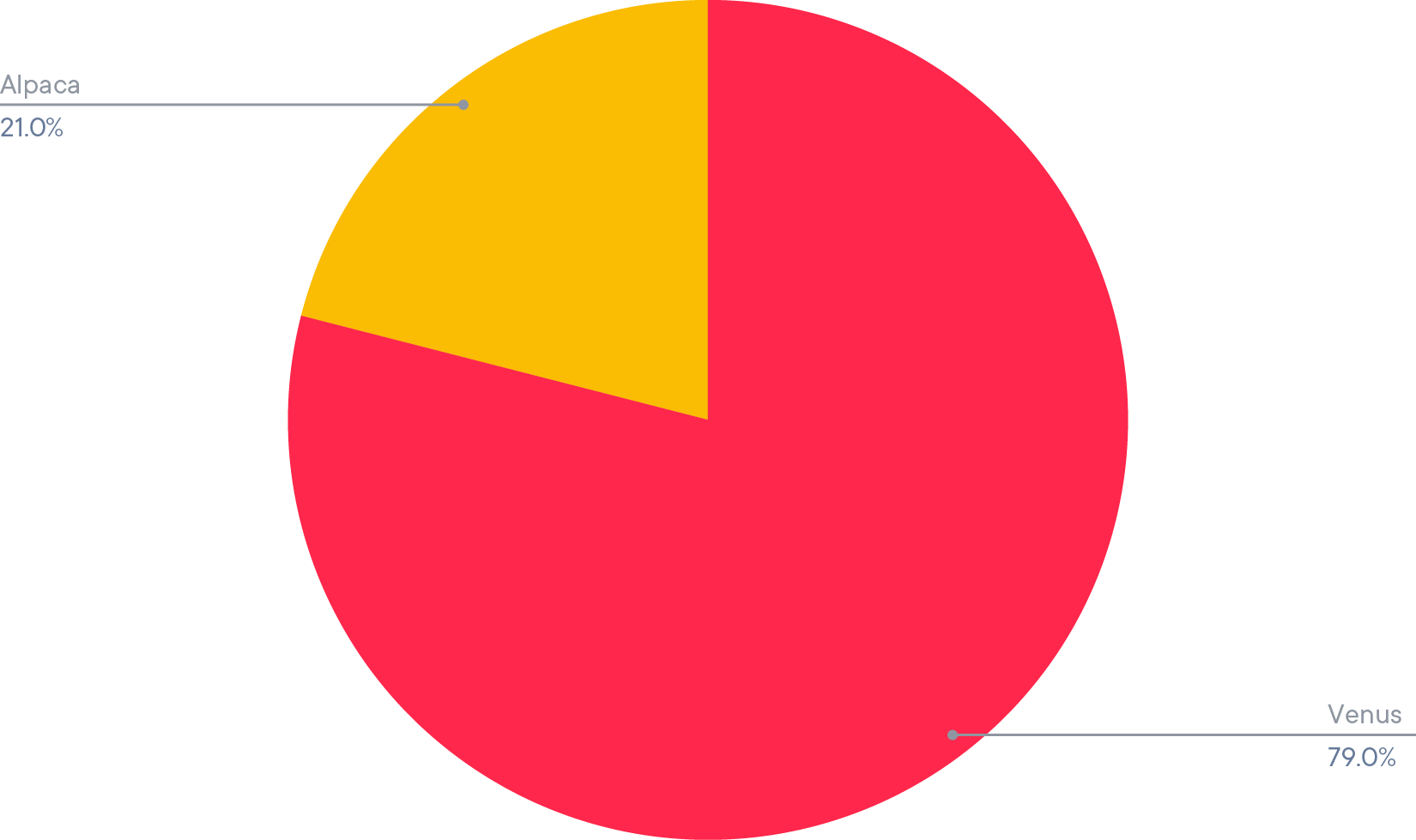 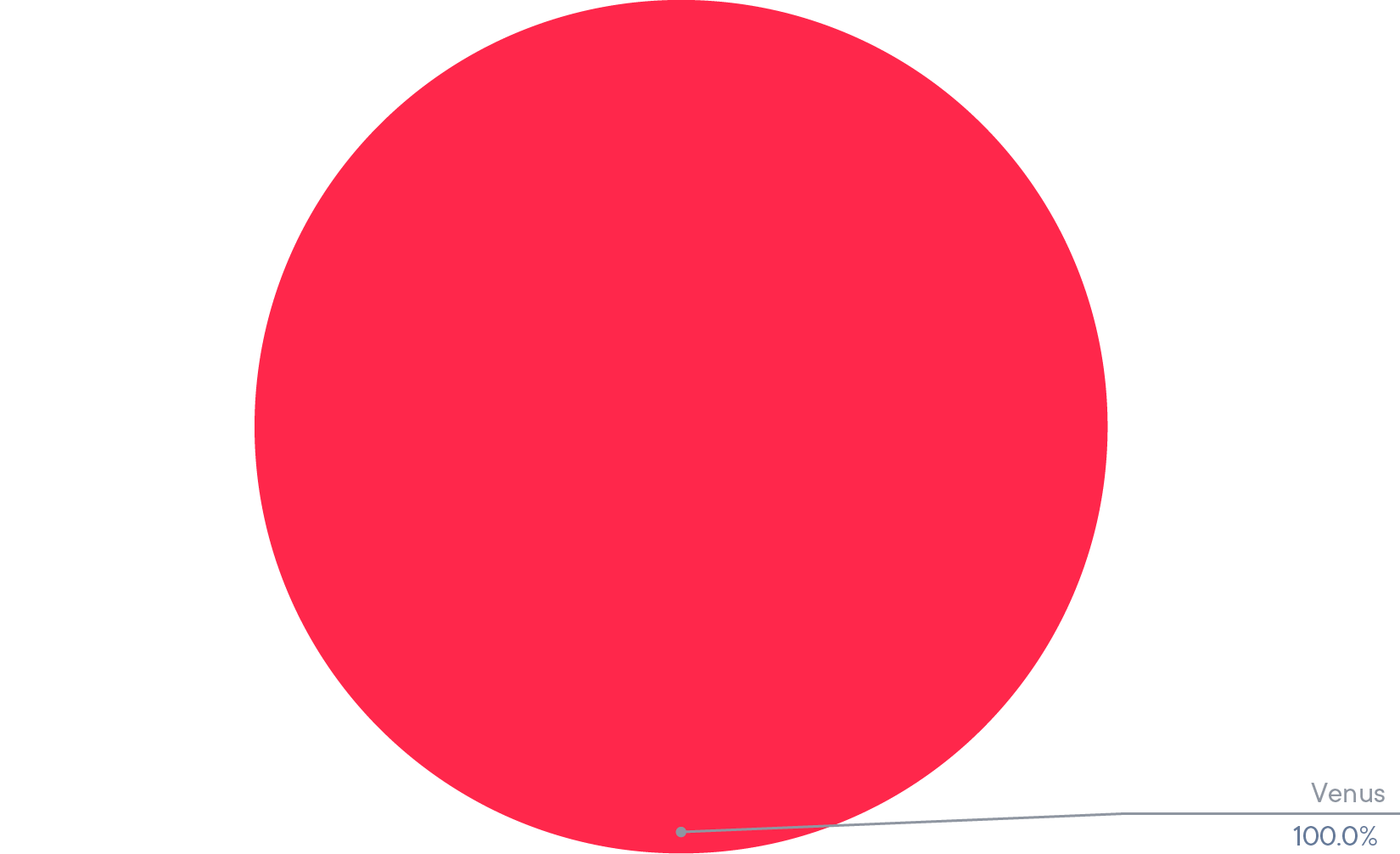 SwissBorg established a USD1 million Safety Net Program in CHSB (8,333,333 CHSB) to protect against Smart Contract risk, and we have historically put the equivalent of 25% of max yield earnings into that program to ensure it grew alongside our community’s investments.

Disclaimer: The information contained in or provided from or through this article (the "Article") is not intended to be and does not constitute financial advice, trading advice, or any other type of advice, and should not be interpreted or understood as any form of promotion, recommendation, inducement, offer or invitation to (i) buy or sell any product, (ii) carry out transactions, or (iii) engage in any other legal transaction. This article should be considered as marketing material and not as the result of financial research/independent investments.

Neither SBorg SA nor its affiliates (“Entities”) make any representation or warranty or guarantee as to the completeness, accuracy, timeliness or suitability of any information contained within any part of the Article, nor to it being free from error. The Entities reserve the right to change any information contained in this Article without restriction or notice. The Entities do not accept any liability (whether in contract, tort or otherwise howsoever and whether or not they have been negligent) for any loss or damage (including, without limitation, loss of profit), which may arise directly or indirectly from use of or reliance on such information and/or from the Article.