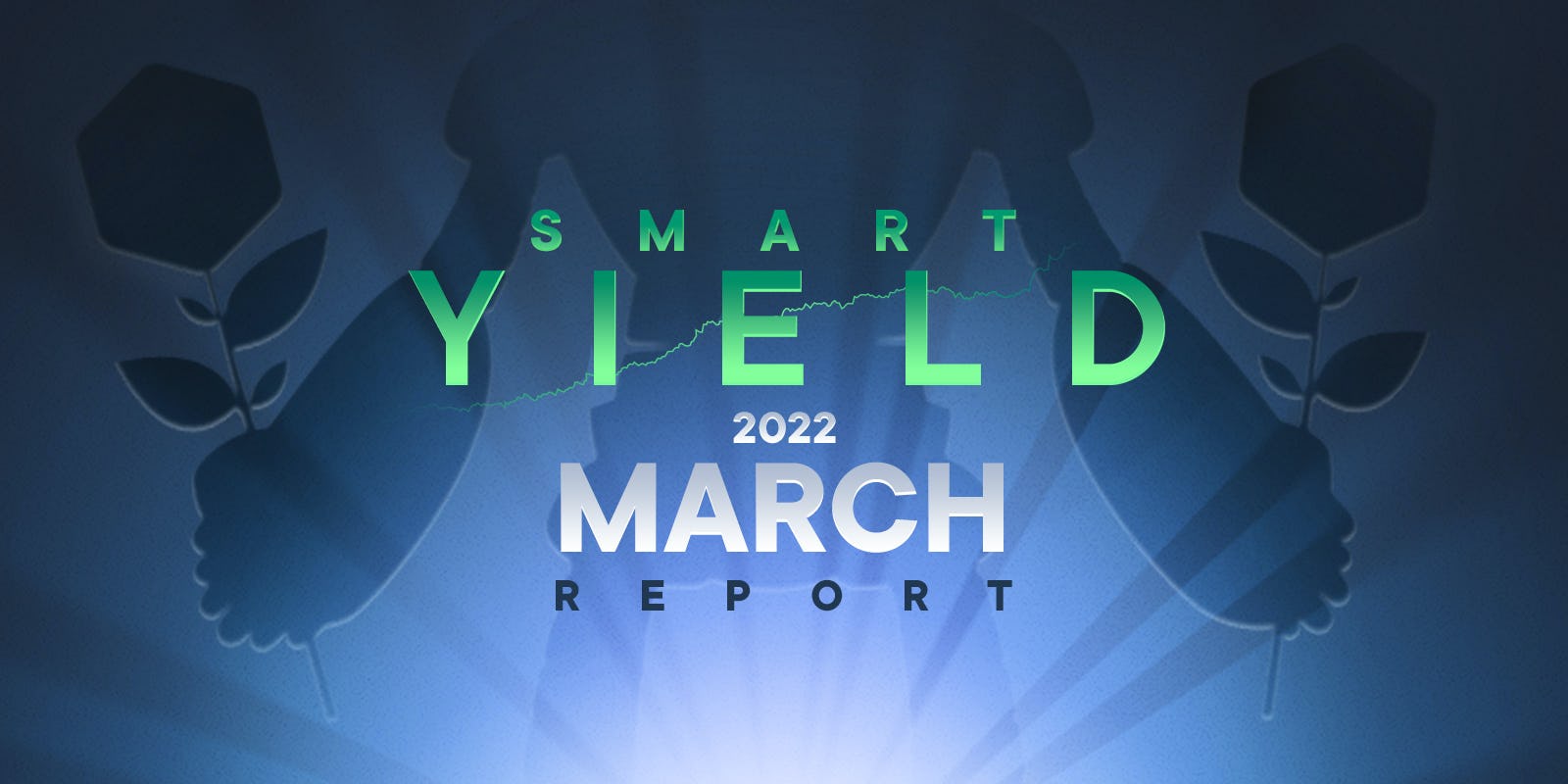 Recent bullish price action has led to a slight decrease in total value locked (TVL) in DeFi, and this is in agreement with the previously outlined inverse correlation. Distribution of TVL between chains has remained fairly constant, as each ecosystem solidifies its market share. The exception to this is Terra, gaining more than 1.5% of the total DeFi market share. To put into better perspective, this is a gain of more than $8 billion in March alone, and accounting for more than a third of its growth.

One of the main reasons behind Terra’s growth is the development/attention the Anchor protocol has gained. The platform is a lending protocol boasting attractive rates of up to 19.5% APY on UST, though some question how sustainable this is. Discussion on the mechanics of LUNA, UST, and the rates on Anchor are out of scope for this summary, and the reader is directed to the numerous opinion pieces which can be found elsewhere. An interesting development worth mentioning is the plan to make a new liquidity pool on Curve; the ‘4pool’. Currently, the largest pool is known as the ‘3pool’ which consists of USDC, USDT, and DAI. This can also be seen as the ‘default’ pool, as many of the other pools are paired to this 3pool. This makes it almost a ‘base layer’ of Curve, and is something that has transpired naturally without the help of liquidity incentives. The majority of liquidity incentives (in the form of Curve tokens) is currently directed to other pools. The ‘4pool plan’ is to direct the majority of the liquidity incentives to the new 4pool, which consists of USDC, USDT, FRAX, and UST. If successful, this has 2 (very big) implications. UST will become an integral part of DeFi across many chains, and DAI will lose market share and usage. There is already significant support for this plan by several platforms who hold the governance power to enact this vote, and it remains to be seen how successful this will be.

On the development side, March saw the release of LayerZero: a cross-chain messaging service. The project is one of the first to enable simple messaging between several blockchains. Most other cross-chain platforms fall under ‘bridges’, which only transfer a certain type of message across chains, usually the ability to unlock tokens on another chain. LayerZero enables passing any arbitrary piece of data, which allows any arbitrary logic to be executed. Going beyond cross-chain dexes, this enables developments such as cross-chain lending (e.g. deposit assets on Ethereum, borrow assets on Avalanche) or yield aggregators (e.g. deposit to the lending platform with the highest rate across all chains). The project was released recently, so it will be some time before we see such developments.

On the security front, one of the largest exploits occurred in March. More than $600 million in Ether was stolen from the Ronin Bridge (a side-chain for Axie Infinity). The hack is unlike those we have seen previously as it was not due to smart contract bugs, but more ‘traditional’ in nature: some of the private keys of the Ronin bridge validators were stolen which allowed unlocking of the assets. It’s also worth remembering that the top 3 highest grossing exploits have all been on cross-chain infrastructure projects (Ronin, PolyNetwork, Wormhole), and this is in addition to the highest bug bounty paid for an exploit found (and patched) on the Polygon Bridge. These events underline the importance of decentralization when it comes to bridges, and how most current solutions are making several compromises on security.

The following table summarizes the shares of the portfolio in March. The EURT under custody in the wallet have stopped their growth, a consequence of a better yield in dollar stable coins. In those, the number of users rose. In addition a yield on DAI has been added and has gathered half a million in a couple of days.

Another wallet was added at the same time, the Aavegotchi yield wallet which got more than 700k in 7 days. SwissBorg becomes one of the few places where yield can be earned on GHST, and it will continue to expand its range of competitive yield on various currencies. All the details of the source of this yield are explained in the next section. 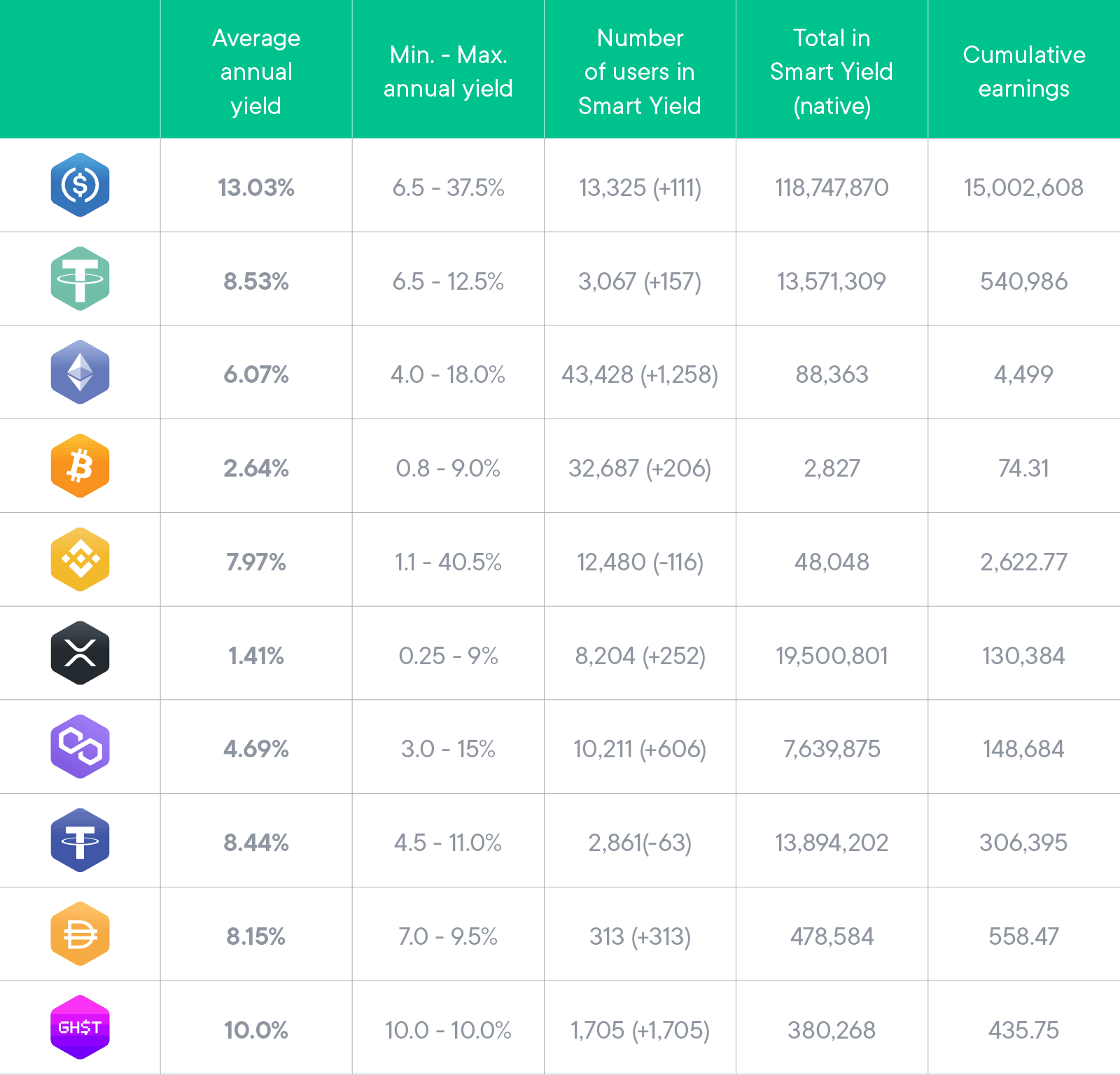 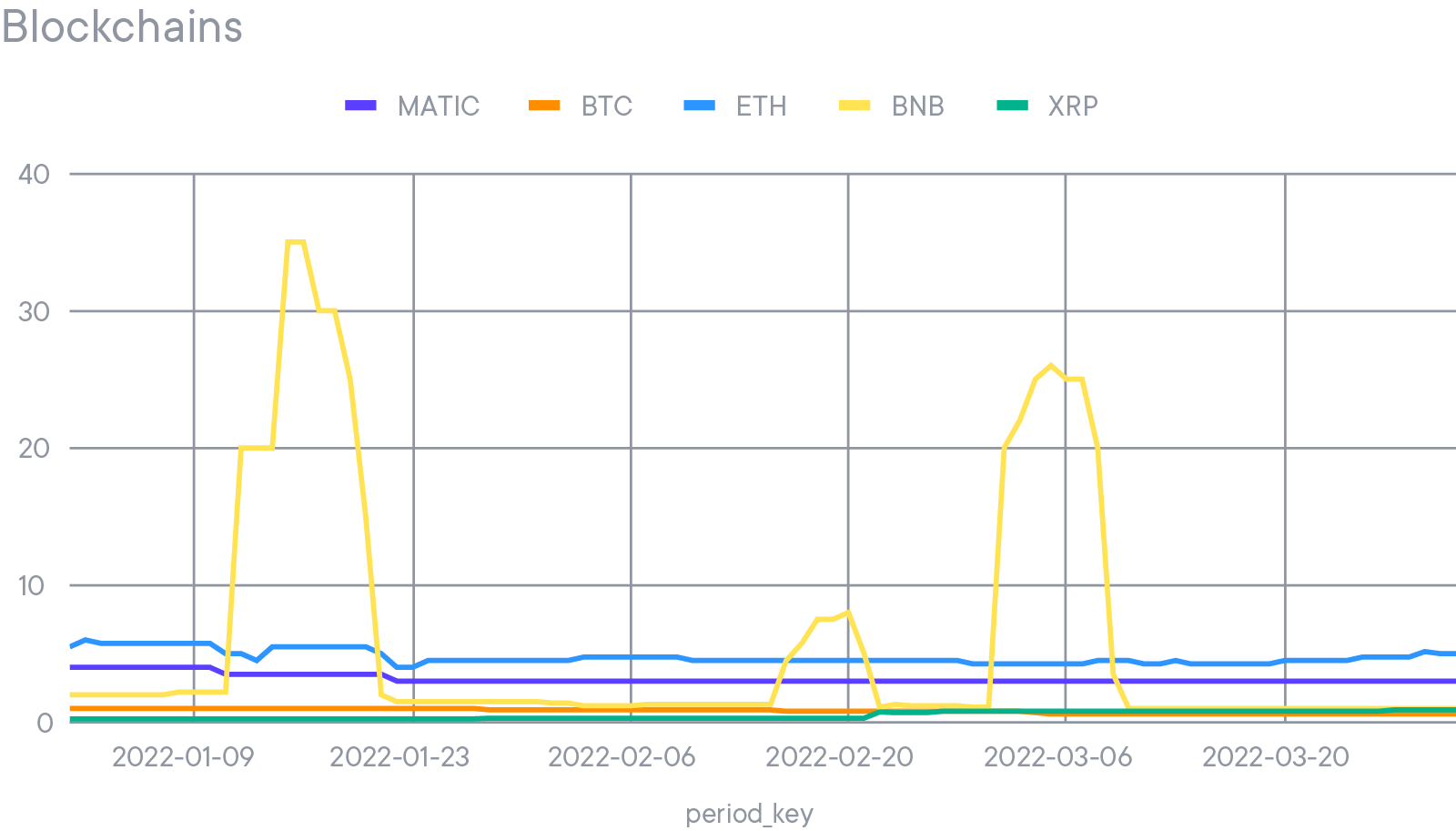 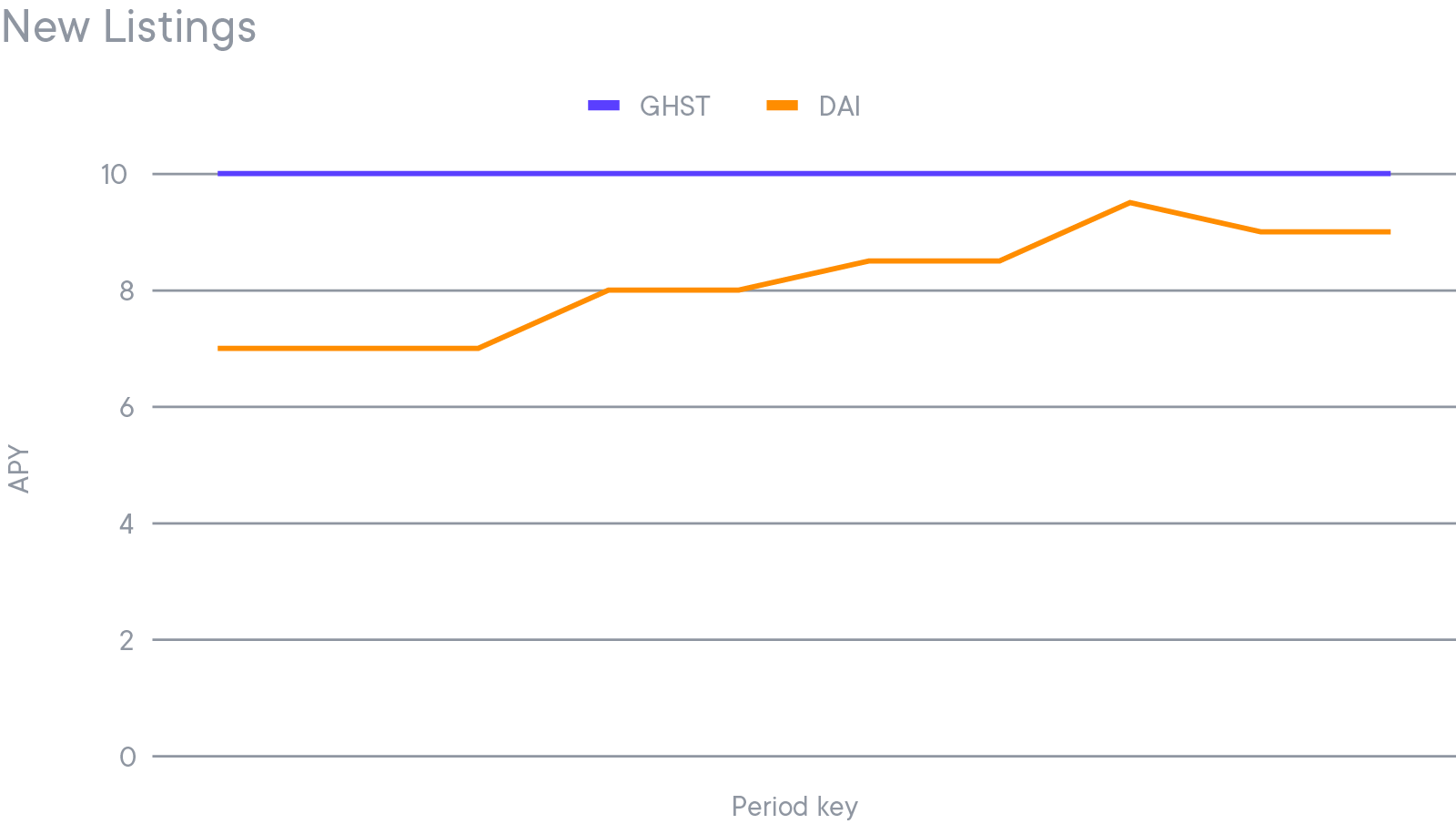 DAI has been added to the list of stable coins and provides the same yield as other USD stable coins. The rest of the tokens have kept a similar exposure to the protocols. Beefy protocol remains an important part of the Stable coin Yield wallet, keeping a competitive and safe APY. The GotchiVault has been added and provides yield for GHST. The vault allows veteran Gotchi community members to optimize the GHST yield for all depositors by participating into ingame events.

We recall that the following selection of protocols always focuses on the less risky strategies out there and therefore may impact the final APY. 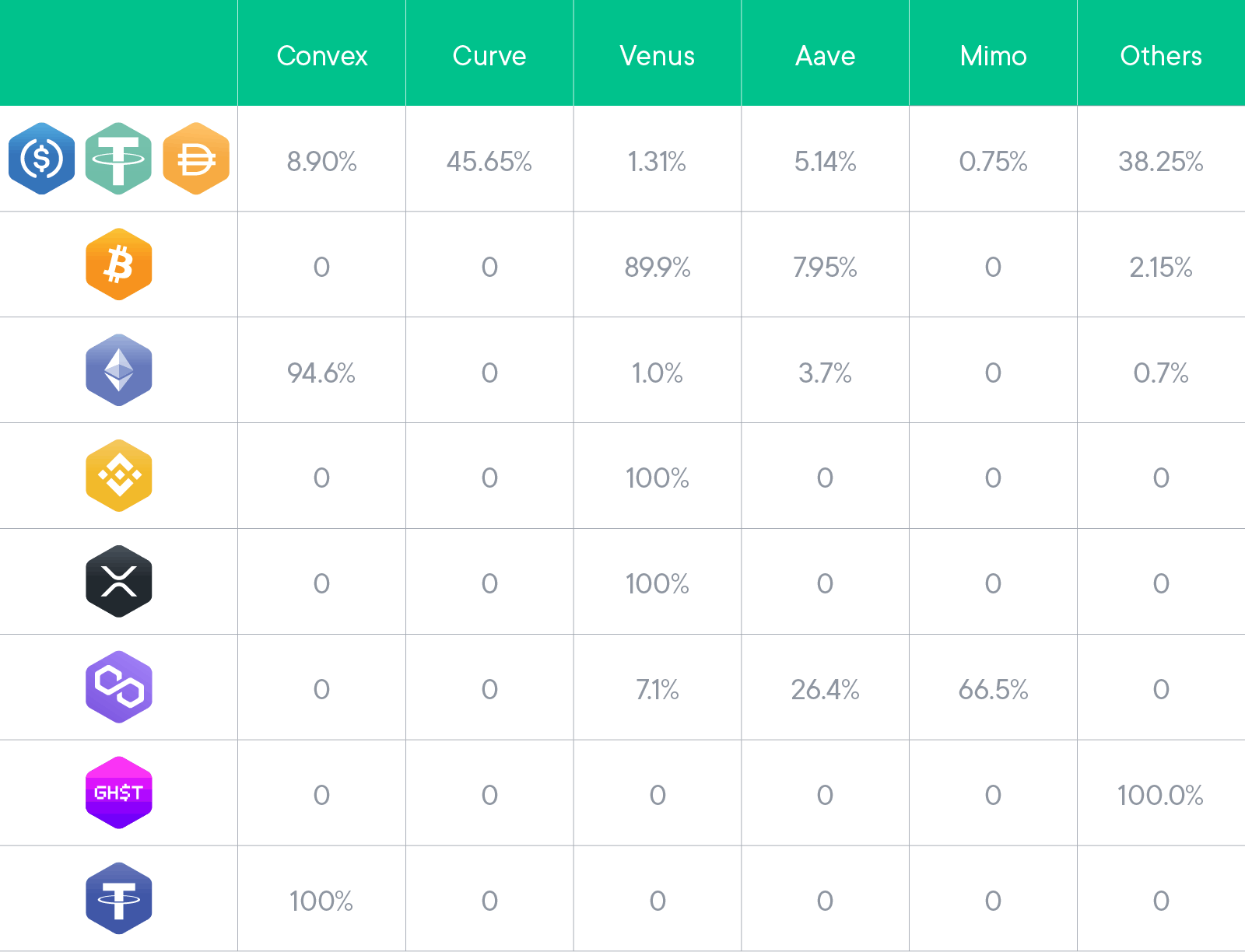 We recall that the funding of the Safety Net has been stopped and SwissBorg is in the process of converting the funds to CHSB. The static Safety Net is still available in case it is needed, and its value will grow with the value of CHSB.

The previous 25% allocation of yield earnings to the Safety Net has been reallocated to the yields themselves, resulting in a yield boost for our users.