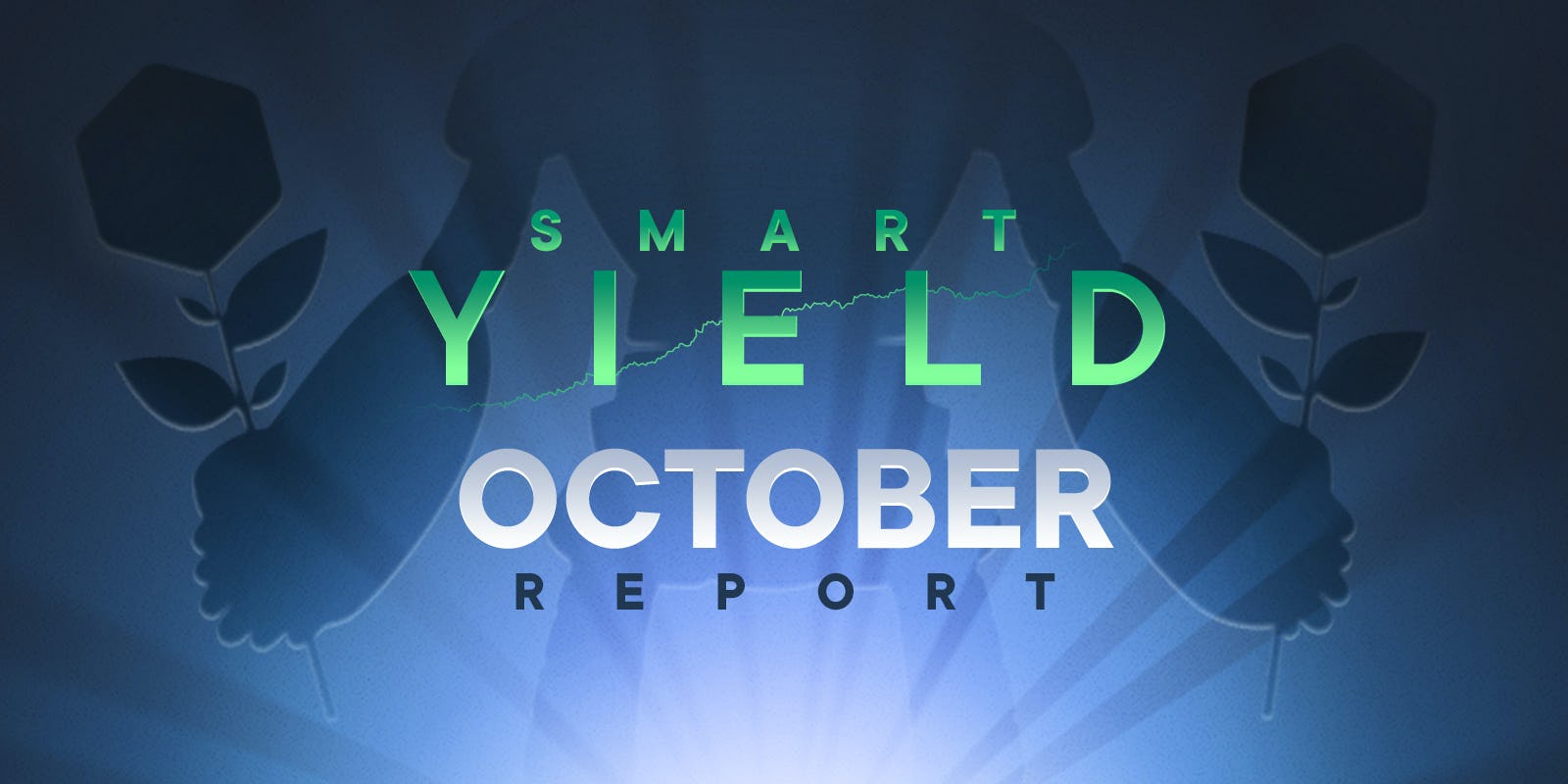 The content of this report will be subject to change based on your feedback and the evolution of the information we receive.

Bitcoin surpassed its all-time-high in October, and Ethereum revisited its level right at the end of the month. As always, this is correlated with the amount of value locked in DeFi, with the total liquidity deposited reaching $250 billion. July still holds the record for the highest TVL on Ethereum when denominated in ETH (ETH prices were around the lows of $1700 in July), 48 million vs the current 38 million. This could be because of several reasons, such as people cashing out at higher ETH prices, but also moving funds to other chains. The battle between blockchains was still in its infancy in July, with only 3 real competing chains (ETH, BSC, Polygon). Since then, Solana, Avalanche, and Fantom have all gone from 100s of millions to several billion USD TVL, as well as Arbitrum (the first roll-up for Ethereum) holding $2.5 billion. We have seen this payoff in October, partly thanks to some of the chains listed running incentive programs to attract liquidity.

For security in DeFi, every month seems to outdo the previous in terms of newsworthy headlines, and October is no different. Cream Finance - a lending platform - was exploited for $130 million, the largest at the time. What’s different is that the attack was a result of two common and harmless DeFi functionalities coming together to create a multi-million dollar loophole. What’s even more interesting is that the same exploit was present on Aave, and the only reason this wasn’t taken advantage of was that it would result in a loss for the attacker. The fact that the vector was present is still surprising, and shows that as DeFi grows and introduces different types of platforms, there will be unexpected interactions which may not be anticipated.

Sticking with the theme of breaking records, the largest bug bounty of $2 million was also paid out this month (keeping in mind that the previous record of $1 million was only set in September). This was for identifying a bug on the Polygon bridge, which would have resulted in a loss of $800 million, and undoubtedly spelt the end of Polygon. The bug was found by a single developer, showing that contribution from individuals is crucial for DeFi.

EURT joined the list of cryptocurrencies offering yield. EURT is another backed currency offered by Tether, it is however less frequently used in DEFI. It brings a good diversification in face of all the dollar pegged stable coins and was quickly adopted within the app.

Adoption also followed the trends in the yield rate. Matic and BNB saw a strong increase during the month, which led to almost a 2x of the amount pledged in the Smart Yield for those two currencies. It came mostly from high net worth individuals chasing the best yields. The other pots stayed impressively stable during October, even when new all-time highs were reached. 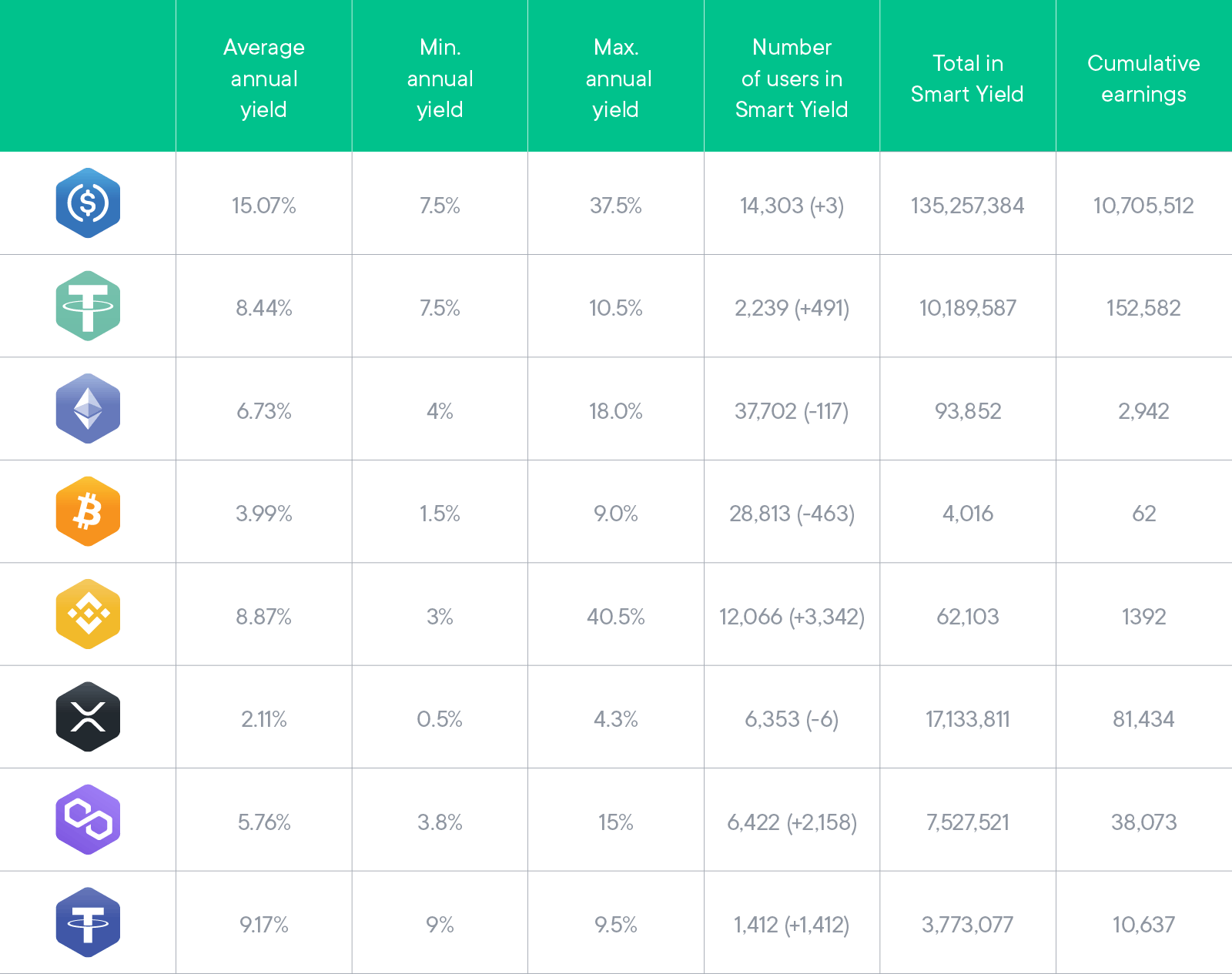 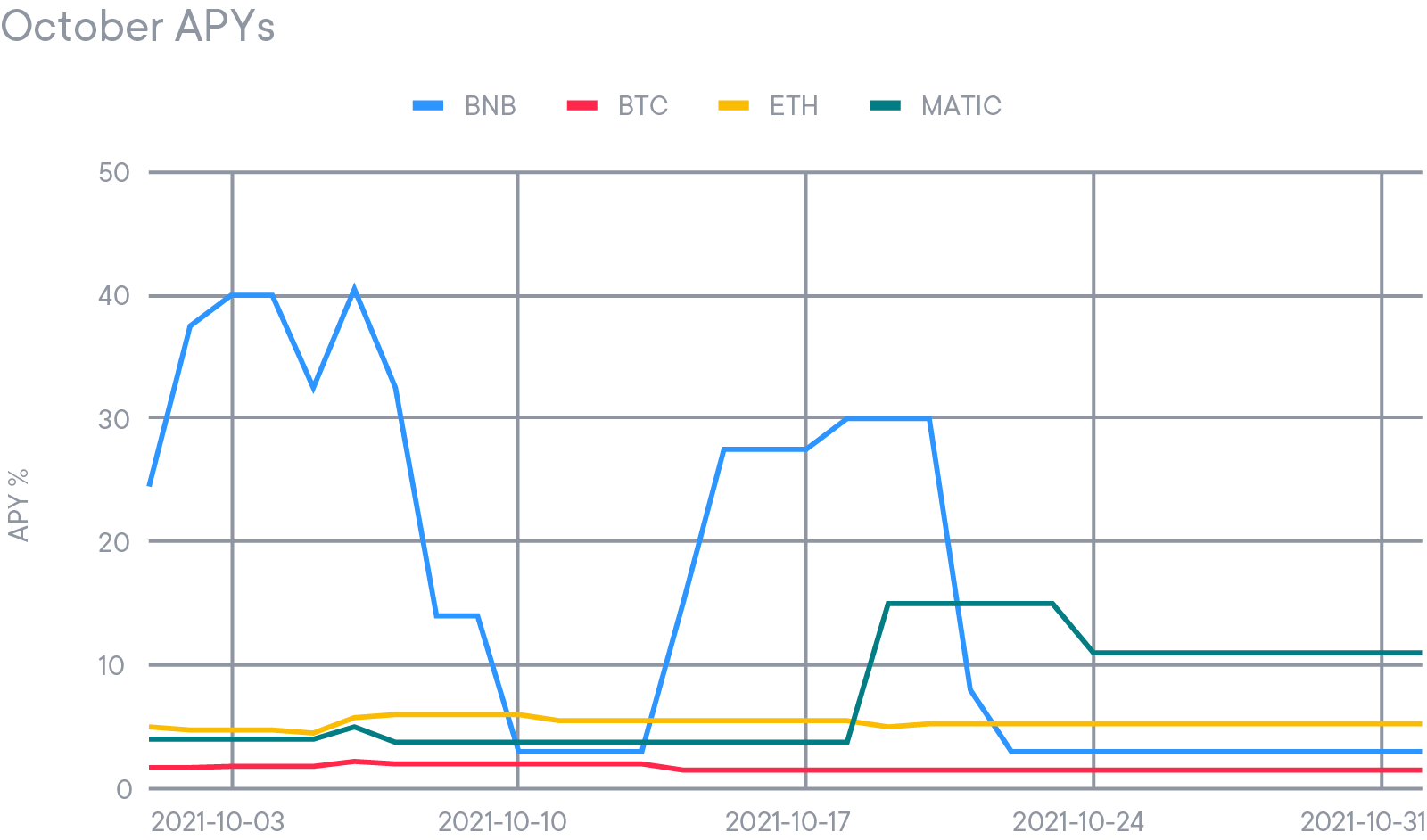 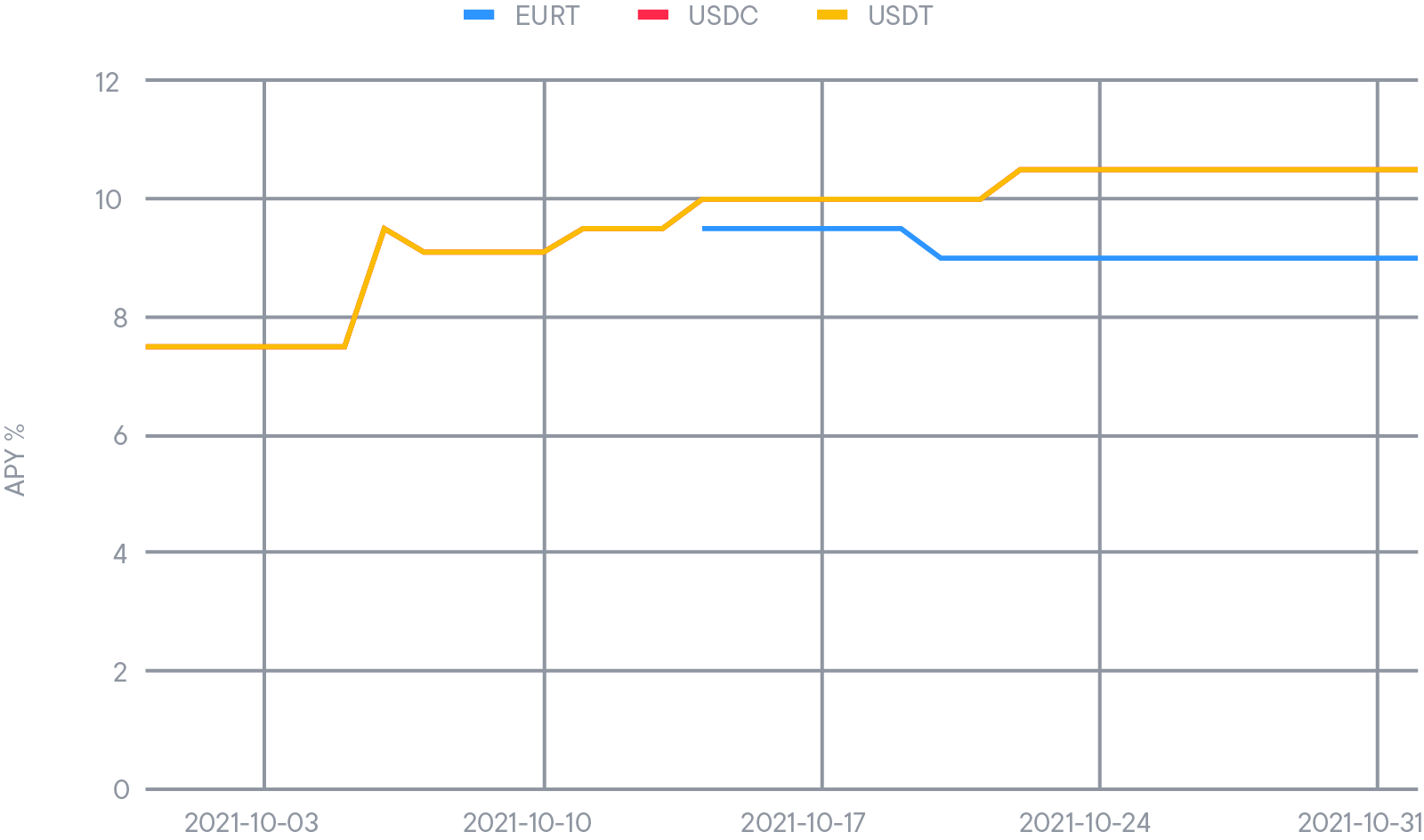 As mentioned last month, the protocols used by the Strategy optimiser have been greatly reduced. Allocation was made only in the following blue-chip platforms, which prioritise risk management:

After having worked with the team and reviewing their forked codebase (which was taken from well established platforms), MIMO was added to the list of safe protocols in October. This lending platform is used to increase the yield offered on Matic only.

As explained in the September Yield Report, we planned to stop accruing the Safety Net. Its total value has been kept and is now following the rate of CHSB. This change happened on October 7th, for a total value of, $12,024,469. The surplus of the yield used before to top up the safety net is now used to increase the rates offered to the users.